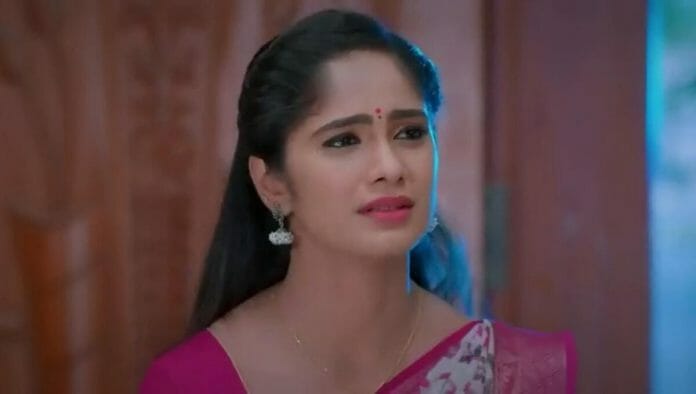 Zee Tamil’s daily soap Vidya No 1 is gearing up for more drama with Chandramohan wanting to fix Vidya’s marriage.

In the previous episode it was seen that Vedavalli lashed out at Vidya for breaking her trust. Vidya silently heard everything feeling helpless. Later Sanjay came to talk to Vidya. The latter scolded him for not reacting when Chandramohan talked about her marriage. She decided to refuse to get married to Chandramohan. But she received Meghan’s mother’s call and she threatened to send Vidya and Sanjay’s photo to Vedavalli if Vidya would refuse to get married.

Sanjay got scared and asked Vidya to agree. Chandramohan told that the groom family would come to see Vidya the next day. Vidya told Sanjay that if he failed stop this marriage, she would either tell the truth or would die shocking Sanjay.

In today’s episode it was seen that a prospective groom family came to see Vidya. They asked about Vedavalli. Just then Vedavalli arrived and gave her consent to the marriage shocking Vidya. Vidya expressed her wish to talk to the boy alone to which Chandramohan agreed. Vidya told the boy that she loves someone else and requested him to reject this proposal. But to Vidya’s shock the boy accepted the marriage proposal with Vidya. Vijay said to Chandramohan to ask Vidya’s opinion too.

Chandramohan asked Vidya if she liked the boy to which Vidya remained silent feeling helpless. Just then Vidya’s aunt and her daughter arrived. They asked Chandramohan how he could fix Vidya’s marriage. Chandramohan questioned why he couldn’t.

What will happen next? What will Vidya do now?