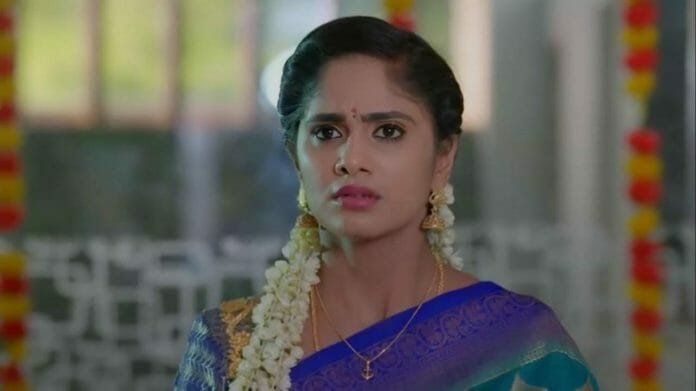 Zee Tamil much loved show Vidya No1 is taking an interesting twist with Manasa accusing Vidya of stealing her bangles.

Previously it was seen that Sanjay gifted bangles to Vidya. Vidya recognized that the bangles design were similar to the bangles that he bought for Manasa. Vidya refused to accept them fearing that Mansa would create any problem if she saw this.

Sanjay disclosed that he chose those bangles for her, but he had to say it was for Manasa when Vedavalli questioned him. He assured Vidya that no problem would come.

Meghna burned in jealousy on seeing Sanjay gifting bangles to Vidya. She planned to put an end to Vidya in that house using that bangles. Meghna saw Manasa was sitting sad saying that she couldn’t find her bangles.

Meghna instigated her that Vidya stole her bangles. Manasa slapped Vidya in the middle of the puja and accused herof stealing the bangles gifted by Sanjay. She showed the babgles that Vidya wearing to all and they acknowledged that they’re the bangles that Sanjay bought for her.

In the upcoming episode it will be seen that Sanjay will defend Vidya saying that she can’t steal anything. Chandramohan, Vedevall and Sanjay will refuse to believe that Vidya can do such a cheap act whereas Meghna, Tilaga, Sneha and Manasa will lash out at Vidya and will demand Vedavalli to throw her out of the house.

Vidya will accept the allegations to save Sanjay. But Sanjay will tell that he bought those bangles and will lie that he did it to help her to recover money from a gold sheme. Manasa will say that Sanjay is lying to save Vidya.

Sanjay will ask to call police to find the truth. Police will come and will search in the whole house. They will find the bangles in Manasa’s room. Manasa will admit of trying to frame Vidya and will blame Chandravamohan giving Vidya more important than her for her act.

What will happen next? Will Vedavalli learn about Sanjay and Vidya’s secret marriage?