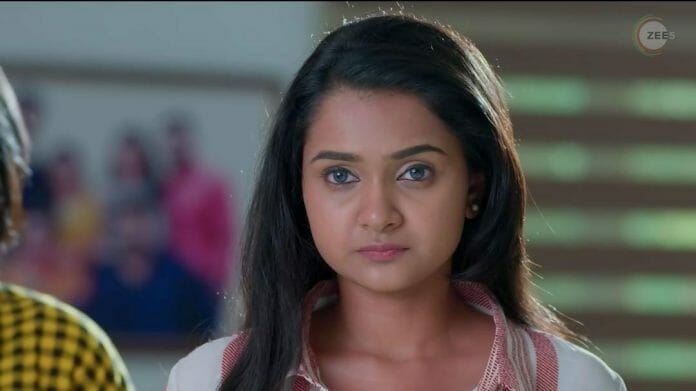 Zee Tamil much loved show Vidya No1 is gearing up for drama with Meghna trying to find what Sanjay is hiding in his room.

Previously it was seen that Meghna threw a stone into Sanjay’s room in order to make Vedavlli to check Sanjay’s room. Hearing the glass broken sound the family wondered what happened.

Meghan told them that something has broken in Sanjay’s room and she took the family to Sanjay room. She urged Vedavalli to check the room.

Sanjay and Manasa tried Vedavalli from entering the room, but Vedavalli forced Sanjay to open the room. Sanjay opened the room without any other option. In the meantime vidhya hid inside the cupboard when the family entered. They don’t find anyone so they went back.

Meghna got furious as her failed. Later Sanjay and vidhya shared a moment. Vidhya drew kolam in the early morning outside of the house. Vijay spotted Vidya.

In today’s episode, it will be seen that Vijay sees Vidya and he questions Sanjay about hiding Vidya in his room. As they are talking, Vedavalli arrives there. Vidya hides immediately. Vedavalli asks Sanjay and Vijay what they are you doing outside in the early morning. They lie that they are talking after their jogging.

Vedavalli asks who puts the kolam. Vijay and Sanjay panic. Just then Meghna comes there and says that vidhya used to put this type of kolam. As Vedavalli wonders how vidhya can put this kolam, Manasa comes and lies that she put the kolam.

What will happen next? How long will Sanjay be able to hide Vidya in his room?