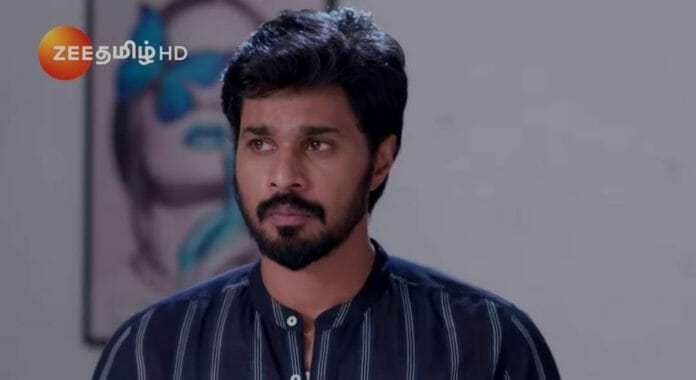 Zee Tamil much loved show Vidya No1 is gearing up for drama with Sanjay hiding Vidya in his room.

Previously it was seen that Sanjay said to Vidya to stay in his room till Vedavalli accepts her. In the night, Sanjay asked Vidya to sleep on the bed and he sleeps on the floor. In the late night, Vidya woke up and admires a sleeping Sanjay.

Sanjay woke up and dragged Vidya near him. They shared a moment. The morning, Sanjay gave Vidya his clothes as she didn’t have any other clothes to change. Sanjay admired Vidya in his clothes and helped to wipe her wet hairs.

He panicked when Vedavalli and Preethi came into his room to show the engagement ring. The ring fell on the floor and rolled under the bed where Vidya was hiding. Preethi was about to pick it up. Sanjay looks tensed.

In today’s episode, it will be seen that Sanjay picks the ring before Preethi in order to prevent her from seeing Vidya. Later Sanjay tries to take food for Vidya secretly, but he gets caught by Meghna who questions him. Vedavalli norices this and asks Sanjay why he wants to eat alone in the room when he doesn’t like it.

Preethi teases Sanjay by saying that he could have told her if he wants to have food alone with her. Sanjay in the dinning table without any options. Vedavalli praises Preewhen she serves Sanjay food. Chandramohan taunts Preethi about serving Sanjay the dishes that he doesn’t like at all.

Later Sanjay prepares noodles for Vidya. In the night, Preethi catches Sanjay when he takes a saree to his room.