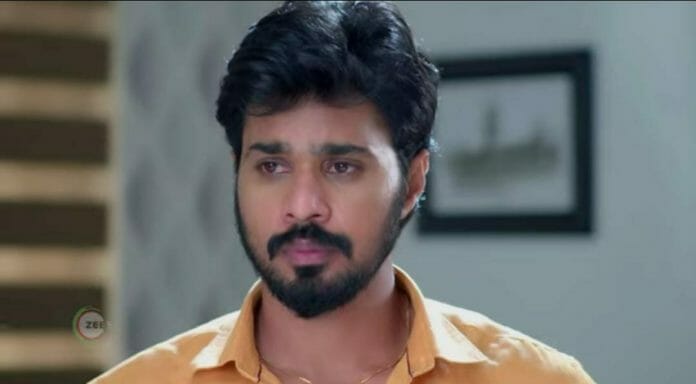 Zee Tamil much loved show Vidya No1 is gearing up for drama with Vedavalli fixing Sanjay and Preethi’s marriage.

Previously it was seen that Sanjay tried to Vedavalli that he is already married to Vidya, but he was unable as Vedavalli was proudly saying how obedient her children were. Just then a man, who works for Vedavalli came there with his family.

He told that his son married the daughter of his enemy family secretly and was living with her from six months. He cried saying that his son ditched him by breaking his trust on him. Vedavalli scolded the boy and the girl. Sanjay and Vidya imaginede Vedavalli scolding them and breaking ties with them after learning about their marriage.

In today’s episode, it will be seen that Meghna overheard Sanjay and Vidya’s talk. Sanjay reassured a worried with Vidya and expresses his love for her. Meghna fumes in anger hearing this. She gets determined to throw Vidya from Sanjay’s life.

Later Meghna movks Vidya stating that Sanjay agreed to marry Preethi. Vidya gives a befitting reply. Karthik reveals Abhishek’s true nature in front of Manasa. The latter is shocked to know that Abhishek is money minded and wanted to call off the wedding.

Chandramohan calls out Manasa and Sanjay and asks their opinion on the marriage fixed by Vedavalli. Though Manasa wants to call the wedding, she gives her consent in front of Chandramohan while Sanjay hesitates to answer.

Seeing this Preethi and her parents create a scene. They tell Vedavalli to cancel the wedding as Sanjay isn’t interested. Vedavalli refuses to believe this.

Will Sanjay tell the truth?

Stay connected to this space for the latest update on your favorite shows.