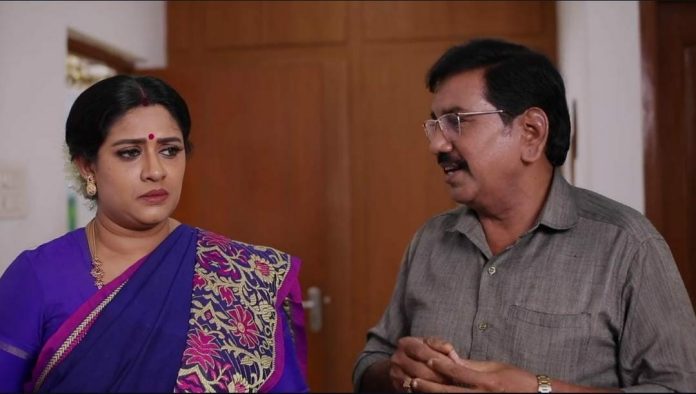 Zee Tamil much loved show Vidya No1 is gearing up for drama with Vidya facing a new problem.
Previously it was seen that Ranjith came to Shakuntala and told how Vidya and Sanjay ruined his plan and got him arrested. He said that he had made certificate that he married to Vidya. He teamed up with Shakuntala to take revenge on Vidya.

Later Shakuntala and Dharshan came to Vedavlli’s house. She told that Vidya is already married to him and she was hiding that truth from all. Ranjith came there and claimed to be Vidya’s wife. He showed Vidya and his edited photos in wedding attire as proof.

Vidya slapped Ranjith dening being his wife. She told that Ranjith was a fraud and tried to marry her for money, but she got him arrested. Shakuntala blamed Vidya of deceiving Ranjith
In the upcoming episode it will be seen that Ranjith will file a case against Vidya for deceiving him.

Police arrives to arrest Vidya. Sanjay, Vijay and Chandramohan will request Vedavalli to stop police from arresting Vidya. Vedavalli will also stop Police. She will say the allegation on Vidya isn’t yet proved and will ask to see it on the court.

Vedavalli will arrange a lawyer for Vidya, but will prohibit anyone from the family to accompany her to the court fearing her family will get defamed. Sanjay will feel helpless. Vijay will encourage Sanjay to go to the court.

Sanjay and Vidya will come to the court. They will be surprised to see Suryaprakash there. The latter will lash out at Sanjay for not revealing his and Vidya’s marriage truth when Ranjith accused Vidya falsely.

Will Sanjay tell the truth and save Vidya?

How Vidya and Sanjay tackle this new problem?