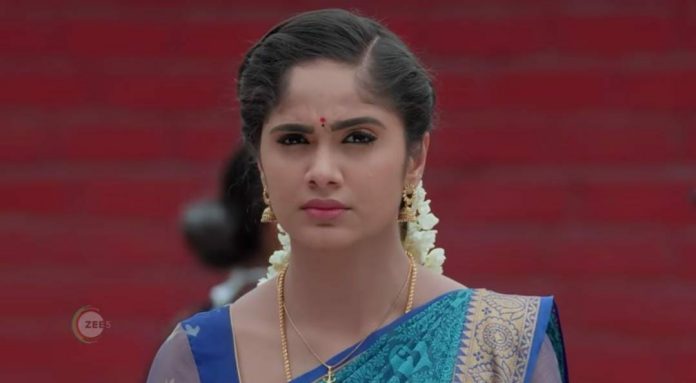 Previously it was seen that Ranjith filed a case against Vidya for deceiving him. Police arrived to arrest Vidya. Sanjay, Vijay and Chandramohan requested Vedavalli to stop police from arresting Vidya. Vedavalli also stopped Police. She said the allegation on Vidya wasn’t yet proved and asked to see it on the court.

Vedavalli arranged a lawyer for Vidya, but prohibited anyone from the family to accompany her to the court fearing her family name would get defamed. Sanjay felt helpless.

Vijay encouraged Sanjay to go to the court. Sanjay and Vidya came to the court. They were surprised to see Suryaprakash there. The latter lashed out at Sanjay for not revealing his and Vidya’s marriage truth when Ranjith accused Vidya falsely.

In the upcoming episode it will be seen that Vidya will defend Sanjay and will warn Suryaprakash to not utter a word against her husband. She will tell that Sanjay accepted her as wife, but he can’t tell their marriage truth now as it will cost Sanjay and Vedavalli’s mother son relation.

Suryaprakash will get overjoyed that finally Sanjay accepted Vidya. However he will worry about Ranjith and the case he gave on Vidya. The latter will also get worried about the same.

Sanjay will reassure Vidya. Later the judge will question Vidya regarding the accusation that Ranjith put on her. Vidya will answer them honestly. Ranjith’s lawyer will keep accusing Vidya. The judge will warn him stating that the allegations against Vidya aren’t proved yet.

Will Sanjay tell the truth and save Vidya? How Vidya and Sanjay tackle this new problem?