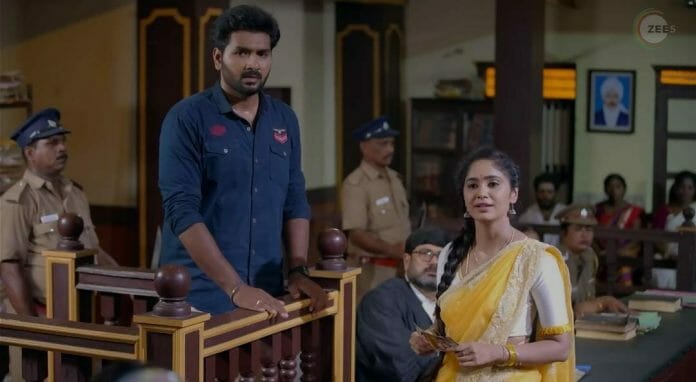 Zee Tamil much loved show Vidya No1 is gearing up for drama with Vidya deciding to defend herself in the court.
Previously it was seen that Vijay pretended to sleep in Sanjay’s room when Vevalli came to his room. Vijay had covered his face with the quilt.

Vedavalli tried to wake up Sanjay, but as she didn’t get any respond, she left thinking in his deep sleep. Vijay felt relieved. Other hand Sanjay requested Vidya to remove her nuptial chain when she was going to the court so that no one would notice it and question her.

Else either Ranjith would claim that he tied that nuptial or chain or they would have to tell their marriage truth. But Vidya refused to remove it.

Vidya will tell her the truth about her marriage with Sanjay and will explain why they are keeping it secret. She will request the lady constable to not this to the judge. The lady will lie to the judge. Chandramohan will be worried about Vidya.

Vedavalli will say that she trusted her so she asked her to defend herself. She will hope that Vidya won’t break her trust on her. In the court Vidya will cross question Ranjith and will prove that his evidence are fake.

Will Vidya win the case?