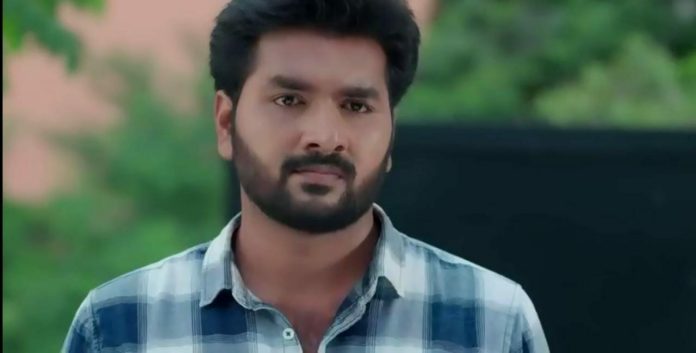 Zee Tamil much loved show Vidya No1 is gearing up for drama with Vidya facing a new problem.
Previously it was seen that Manasa and Vidya decided to teach a lesson to Meghna for adding spices on the sauce made by Vidya. So, Mansa and Vidya prepared sandwich by adding lot of spices.

Manasa went to Meghna and convinced her to have it. Vidya watched this standing at the door. Meghna cried eating the spiced sandwich. Manasa warned Meghna to not trouble Vidya again. Meghna fumed in rage. Later Vedavalli asked Vidya to read English newspaper. Manasz saved Vidya again from Vidya’s truth getting exposed.

Sanjay made a wish to Vidya. He asked a kiss on his hand. Vidya fulfilled it.
In the upcoming episode it will be seen that Ranjith will come to Shakuntala and will tell how Vidya and Sanjay ruined his plan and got him arrested. He will say that he made certificate that he married to Vidya. He will team up with Shakuntala to take revenge on Vidya.

Later Shakuntala and Dharshan will come to Vedavlli’s house. She will tell that Vidya is already married and she is hiding from all. Ranjith will come and will claim to be Vidya’s wife. He will show Vidya and his photos in wedding attire as proof.

Vidya will slap Ranjith and will deny being his wife. She will tell that he was a fraud and tried to marry her for money, but she got him arrested. Shakuntala will blame Vidya of deceiving Ranjith.

Will Sanjay tell the truth and save Vidya?

How Vidya and Sanjay tackle this new problem?
Stay connected to this space for latest update of your favorite shows.