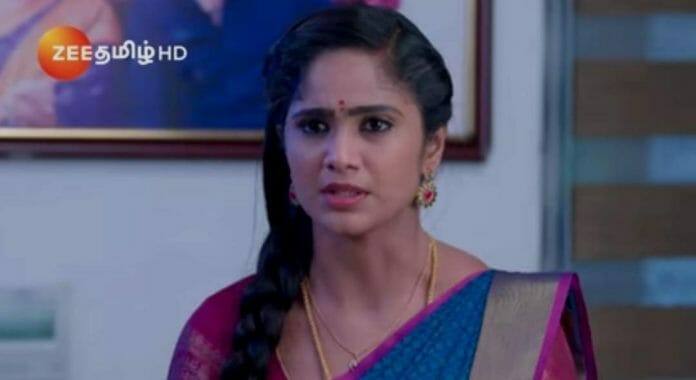 Zee Tamil’s much loved show Vidya No1 is gearing up for drama with Meghna growing suspicious.

Chandramohan revealed to them how he had overhead Preethi and Meghna’s conversation and had shifted Vidya to another room. Later, Vidya requested Sanjay to take her to the temple on a special occasion. But Sanjay refused.

Vidya was sad. However, Sanjay was ready to take Vidya to the temple in the night. He turned off the main electricity supply box. But Preethi spotted Sanjay while Vidya hid.

In today’s episode, it will be seen that Sanjay takes Vidya to the temple. Vidya prays for Chandramohan and Vedavalli’s reunion while Sanjay prays for Vedavalli accepts Vidya. While returning from the temple, they are spotted by one Preethi’s friend who recognizes Vidya as the girl of the viral video with Sanjay. She immediately alerts Preethi about the same.

Preethi waits for Sanjay and Vidya’s return to catch them red-handed. She turns on the line lights when Vidya and Sanjay enters the house. She calls out the family. Everyone arrives except Vedavalli. Poorni is shocked to see Vidya with Sanjay. Preethi and Meghna accuse Sanjay of hiding Vidya in his room.

Manasa and Chandramohan ask Vidya to leave. But Vedavalli stops Vidya. Vedavalli slaps Sanjay for disobeying her. Sanjay lies that he didn’t disobey her, but just brought Vidya home.