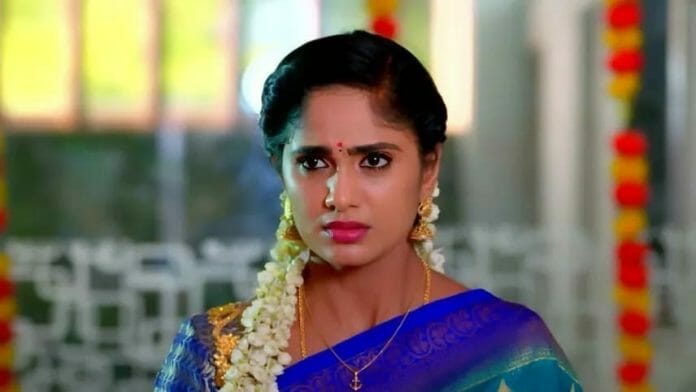 Zee Tamil much loved show Vidya No1 is gearing up for drama with Sanjay beating a professor who misbehaved with Vidya.

Previously it was seen that Sanjay pretended that he believed Meghna cooked the food and praised her cooking talent. Meghna also believed this and got elated. She asked Sanjay if he could take her out for making such delicious dishes for him.

Sanjay denied giving some excuse. Later he video called Vidya and teased her praising Meghna. Then he told that he understood that it was cooked by Vidya with the taste of food.

He praised her cooking skills. Later Manasa scolded Vidya when the latter brought Juice for Sanjay. Vidya got sad and said that Manasa would never accept her. Sanjay reassured her. Vidya lied that she was going to the market and went for tuition. At the institution a professor misbehaved with Vidya.

In the upcoming episode it will be seen that Sanjay gets furious when he learns that a teacher misbehaved with Vidya. He comes to the institution and beats that professor. The institution owner apologizes to Sanjay and fires the professor.

Sanjay gives a lecture about teachers misbehaving with their students shaming their profession. Later he drops Vidya at the parlor asking Vidya to get ready for Manasa’s engagement. There Dharshan comes along with her girlfriend.

Vidya clicks their photo accidentally while clicking her selfie. Later Vidya notices that Sanjay left Manasa’s ring in the hall. She takes it to Manasa. The latter gets furious on seeing Vidya with her engagement ring and starts insulting Vidya.

What will happen next? Will Vidya notice Dharshan and his girlfriend photo on her phone and stops Manasa’s life from getting ruined?