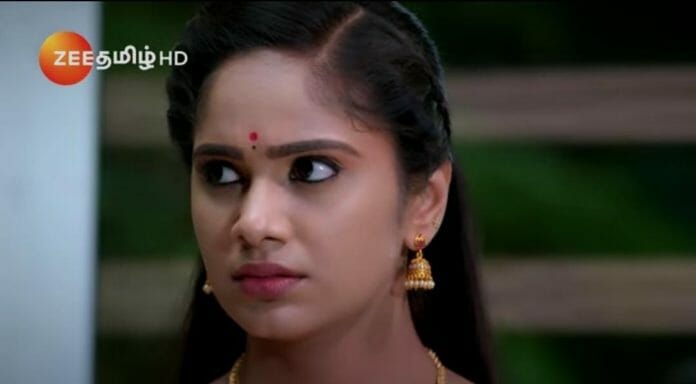 Zee Tamil’s daily soap Vidya No 1 is gearing up for more drama with Chandramohan wanting to give his half property to Vidya.

In the previous episode it was seen that Vedavalli got furious when a parent called and asked to forgive his son’s mistake. He mentioned about Vedavalli forgiving Manikam who tried to kill Chnadramohan. Vedavalli shouted in anger. Vijay, Vedavalli sister and all gathered on hearing this and they got shocked. Vedavalli sister advised Vedavalli to talk to Chandramohan as his wife forgetting her ego.

Manasa got furious when Chandramohan refused to go with Manasa for shopping as he had some work with Vidya. Meghna provoked Manasa against Vidya. Manasa created a scene and demanded to throw Vidya out of the house immediately. Vedavalli reprimanded Manasa.

Vidya shares the same with Sanjay. Vijay overhears their talk and learns the matter after enquiring to Vidya and Sanjay. They doubt that Meghna and her mother can be behind this and try to find the photo from their mobile, but they fail. So Sanjay and Vijay say to Vidya to accept Chandramohan’s properties. But Vidya is scared to break Vedavalli’s trust.

What will happen next? What Vidya will decide?