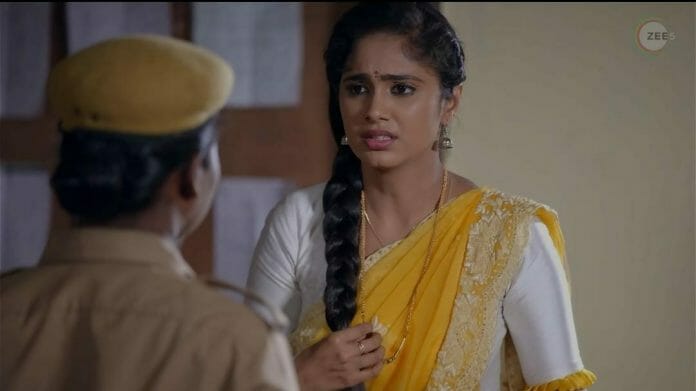 Vidya understood Vedavalli’s point and agreed with her. She decided to fight for herself and said that she wouldn’t return to this house if she lost. Meghna mocked Vidya saying that she would definitely lose the case and pull her hair. Manasa released Vidya’s hair from Meghna’s hand. She warned Meghna to stop troubling Vidya.

Chandramohan got worried about Vidya and requested Sanjay to help Vidya get out of this problem. Sanjay assured him to save Vidya. Sanjay told Vijay how Vidya had mortgaged her land and got money to pay tax and had saved their college from getting sealed. In the late night Sanjay came to Vidya’s room to help her to prepare her arguments for her case. Meanwhile Vedavalli went to Sanjay’s room finding him

In the upcoming episode it will be seen that Vijay will be pretend to sleep in Sanjay’s room when Vevalli will come to his room. Vijay will have covered his face with the quilt.

Vedavalli will try to wake up Sanjay, but as she doesn’t get any respond, she will leave. Vijay will feel relieved. Other hand Sanjay will request Vidya to remove her nuptial chain when she is going to the court so that no one notices it and question her.

Else either Ranjith will claim that he tied that nuptial or chain or they have to tell their marriage truth. But Vidya will refuse to remove it. Later in the court the judge will permit Vidya to defend herself. The judge will ask the lady constable check Vidya if she is wearing any nuptial chain. The constable will see the nuptial chain that Vidya is wearing.

What will happen next? How Vidya will handle this?
Stay connected to this space for latest update of your favorite shows.