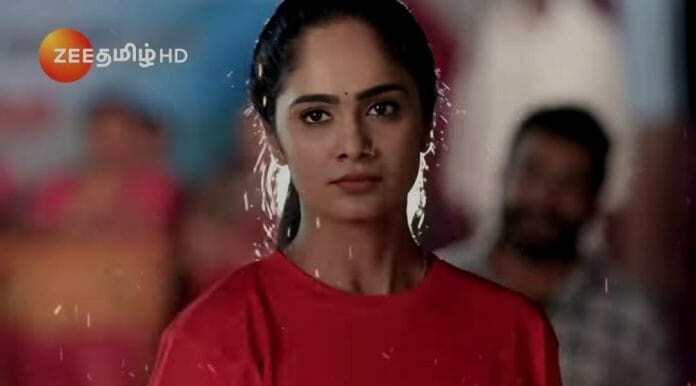 Zee Tamil’s popular show, Vidya No1, is gearing up for drama with Shakuntala cheating to win the game by injuring Manasa.

Previously, it was seen that Vedavalli stayed adamant that Manasa shouldn’t play in her team while Sanjay, Chandramohan and village head tried to convince Vedavalli as Manasa was an important player for the team. Shakuntala intervened and asked Vedavalli and Manasa to stop their drama.

She mocked Vedavalli. Manasa gave a befitting reply. Finally Vedavalli got convinced and Manasa played in the team. The competition began Manasa and her team played well and took lead in the score board. Shakuntala and Dharshan included two players who had just gotten released from the jail, in order to attack Manasa during the game.

That girls injured Manasa badly. Manasa’s hand and leg were bleeding and she was pain. She was unable to take part in the competition anymore. Learning that it was done by Dharshan and Shakuntala, Sanjay beat Dharshan.

In today’s episode, it’s seen that as Manasa is injured, she gets disqualified from the match. Everything is wondering who will replace Manasa in the team. Preethi’s mom says that Preethi will play. Vedavalli agrees.

Preethi asks her mom why she took her name when she knows nothing about Kabaddi. However, Preethi’s mom urges Preethi to participate else Vidya will participate and get in Vedavalli’s good book. Preethi gets injured by the girls of Shakuntala and gets eliminated soon.

Will Vidya keep her promise to Vedavalli and win the match?