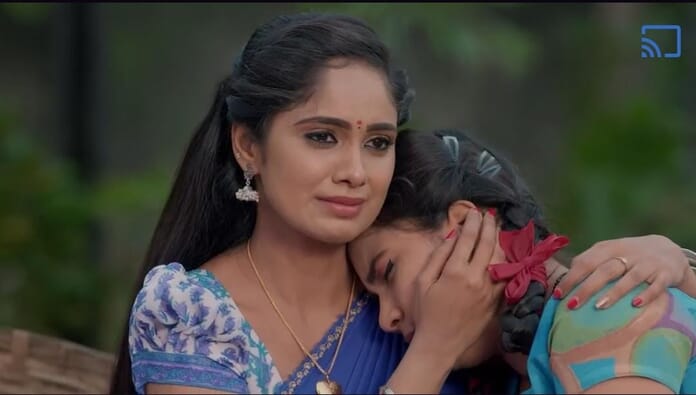 Zee Tamil’s recently aired daily soap Vidya No 1 is currently showing Sanjay to decide to meet Suryaprakash without Vedavalli’s knowledge to get Suryaprakash’s land for his business.

In the previous episode it was seen that Sanjay enquired a man about the transport available there to reach his grandpa’s village and learned that there’s not much transport facilities except the mini truck that brings the village people to the market and then takes them back. Sanjay bribed the truck driver to take him alone to the village. The driver agreed, but Vidya stopped them before they can drive off. Vidya threatened the driver to complain to Suryaprakash about this. The driver got scared and returned Sanjay his money. Sanjay traveled along with Vidya and the villagers. After reaching village, Sanjay slipped and fell down while getting down from the truck. Vidya tried to help him, but she also fell over him. They both will look on at each other

In today’s episode it’s seen that Sanjay gets up and reveals to Vidya that he intentionally pulled her down to teach her a lesson. He asks her to stay away from him and leaves. Vidya puts the groceries that got wet to dry under the sunlight. Vidya’s aunt beats her for spoiling the groceries. Vidya’s cousin and her uncle stop her aunt supporting Vidya. Later Vidya visits Suryaprakash and finds he is still sad. Ganesh comes back from the city and he says to Vidya that he got Vedavalli’s house landline number. Vidya phones to talk Chandramohan, but Madavan attends the call and lies that Chandramohan is out of the town.

Will Vedavalli find out Sanjay’s lie? How she will react?