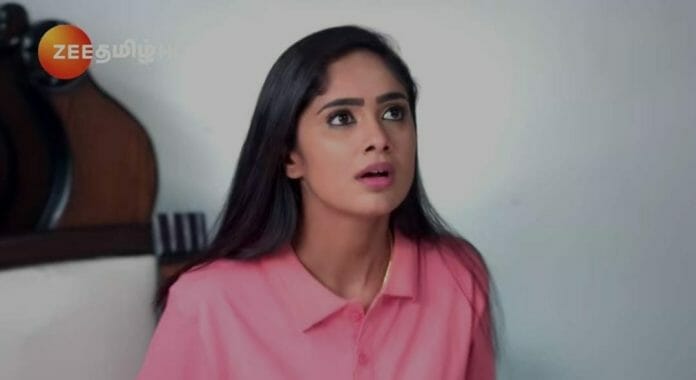 Zee Tamil much loved show Vidya No1 is gearing up for drama with Vedavalli preparing for Sanjay and Preethi engagement.

Previously it was seen that Preethi slapped Vidya accusing her of trying to trap Sanjay for money. Sanjay denied it and said that it was a coincidence that Vidya and him met in the village. However Preethi wasn’t convinced and warns Vidya to stay away from Sanjay.

Preethi apologized to Vidya. Sanjay then convinced Preethi not tell what had happened in the village to Vedavalli. The family gave grand welcome to Sanjay. Vedavalli announced that she got approval for Sanjay’s project using her influence as a compliment for Sanjay’s obedience towards her.

Sanjay hid from Chandramohan, Vijay and Manasa about meeting Vidya in the village. Later Sanjay picked up Vidya who had reached Chennai. He sneaked with Vidya inside the house from the back door. He hid seeing Meghna coming their way.

In today’s episode, it will be seen that Sanjay says to Vidya to stay in his room till Vedavalli accepts her. In the night, Sanjay asks Vidya to sleep on the bed and he sleeps on the floor. In the late night, Vidya wakes up and admires a sleeping Sanjay.

Sanjay wakes up and drags Vidya near him. They share a moment. The morning Sanjay gives Vidya his clothes as she doesn’t have any other clothes to change. Sanjay admires Vidya in his clothes and helps to wipe her wet hairs.

He panics when Vedavalli and Preethi come into his room to show the engagement ring. The ring falls on the floor and runs inside the bed where Vidya is hiding. Preethi is about to pick it up. Sanjay looks tensed.