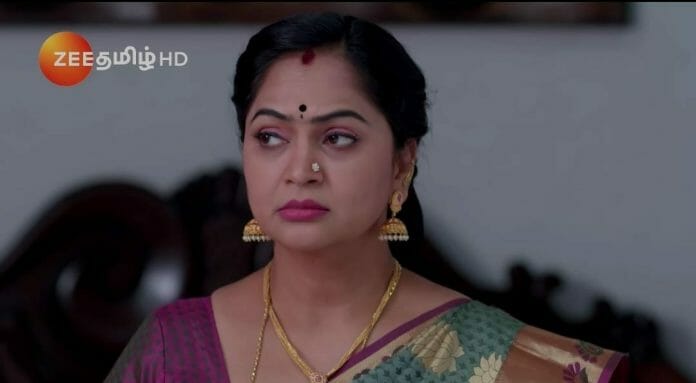 Zee Tamil much loved show Vidya No1 is gearing up for drama with Meghna growing suspicious.

Previously it was seen that Preethi asked Sanjay for whom he had bought the saree. Just then Vedavalli arrived there and said that Sanjay must have bought it for Preethi. Sanjay noded yes.

Preethi became happy. Vedavalli praised Sanjay. Meghna noticed this and grew suspicious. She doubted that Sanjay was hiding Vidya in his room. Later Sanjay gave Vidya another satee that he had hidden in his bag. Vidya became happy.

In today’s episode, it will be seen that Meghna will throw a stone into Sanjay’s room in order to make vedavlli to check Sanjay’s room. Hearing the glass broken sound the family will wonder what happened.

Meghan will tell them that something has broken in Sanjay’s room and she will take the family to Sanjay room. She will urge Vedavalli to check the room.

Sanjay and Manasa will try Vedavalli from entering the room, but Vedavalli will force Sanjay to open the room. Sanjay will open the room without any other option. In the meantime vidhya will hide inside the cupboard when the family enters. They won’t find anyone so they go back. Meghna will get furious as her failed.

Later Sanjay and vidhya will share a moment .Vidhya will draw kolam in the early morning outside of the house. Vijay will spot Vidya.

What will happen next? How long will Sanjay be able to hide Vidya in his room?