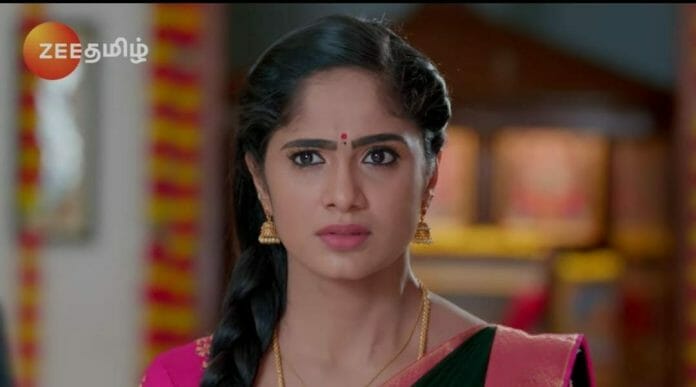 Zee Tamil’s much loved show Vidya No1 is gearing up for drama with Suryaprakash stopping Sanjay and Preethi’s engagement.

Previously, it was seen that Sanjay plan flopped as Vedavalli wanted the engagement to happen that day at any cost despite the priest suggesting postponing the engagement. Vedavalli said thar they would only exchange the plates as Sanjay couldn’t wear the engagement ring in his injured finger.

Preethi was disappointed that she couldn’t make Sanjay wear the engagement ring. As they were about to exchange the plates, Suryaprakash and Mayandi entered the house. Mayandi kicked the plate.

They said that this engagement wouldn’t happen as Sanjay should marry Vidya. They didn’t reveal that Sanjay and Vidya were already married to each other as Vidya had taken a promise from them. Vedavalli got furious and said that it wouod never happen. Mayandi and Suryaprakash challenged Vedavalli to get Vidya married to Sanjay at any cost.

In today’s episode, it will be seen that Vedavalli, Suryaprakash argue about Sanjay marrying Vidya. Vedevalli firmly refuses to accept Vidya as her daughter-in-law ever. Suryaprakash asks why Vedavalli can’t. Vedavalli states that Vidya is uneducated, so she won’t be able to take charge of her institution after her.

Suryaprakash reveals how Vidya saved Vedavalli’s institutions from getting sealed. Vedavalli fumes in rage hearing this. She slaps Sanjay for taking help from Vidya. Sanjay tries to calm him and sends him back, but Suryaprakash also slaps Sanjay. Vidya asks where Vidya why she didn’t come with him. Surya prakaash says that Vidya is here only shocking all.

What will happen next? Will Vidya’s cover blow off?