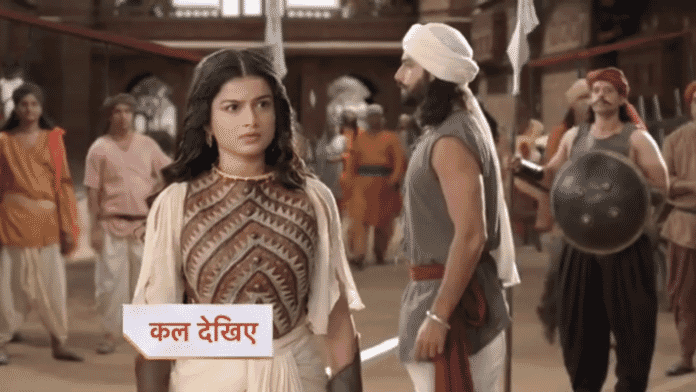 Star Plus new historical show “Virodhi” is grabbing the attention of the audiences. Viewers are loving the performances of the actors, whereas the real-life story of Baxi Jagabandhu is keeping them hooked to their television screens.

In the current track, Geoffrey visits Maharaja Gajapati to learn about Baxi and his conversation. Maharaja gets nervous and tells that they didn’t had any important conversation, while Geoffrey tells him about his encounter with Baxi. He warns Maharaja not to lie and leaves from there.

Here, Charan gets some information about Baxi and notify it to Geoffrey. He tells about Baxi going to Badamba kingdom to get their help in defeating the British.

Subarna and Radha sends off Baxi and prays for his success. Meanwhile, Geoffrey and his soldiers kidnaps innocent kids of Badamba. Whereas, people of kingdom goes to take help from Kalyani, who promises to save their kids.

Elsewhere, Geoffrey visits Kalyani and have a private conversation. He warns her not to do any tie up with Baxi if she wants to save the kids. He also threatens him about Mohan, making her shocked.

Gadadhar taunts his mother and Radha for doing partiality with him and donating all the money on Baxi. Subarna confronts him, while his frustration gets exploded. She feels hurt hearing her words and looks at him as he leaves.

Ahead, Kalyani guards her kingdom along with soldiers. At that time Baxi comes there. She gets suspicious on him and ask about his identity, which he denies to give. She declares a fight with him and both takes their sword out and fought with one another.

Now in the upcoming episode, Radha will pray for her husband’s success. Whereas, Baxi and Kalyani will meet again. Baxi will return to Radha and notify her about Kalyani being stubborn. Meanwhile, Kalyani will discuss about Baxi, while others will tease her.

Will Baxi help Kalyani to save the kids?
Will Kalyani agrees to tie up with Baxi?
How will they able to defeat Geoffrey?

Stay connected with us for more news, Spoilers and written updates of Vidrohi.