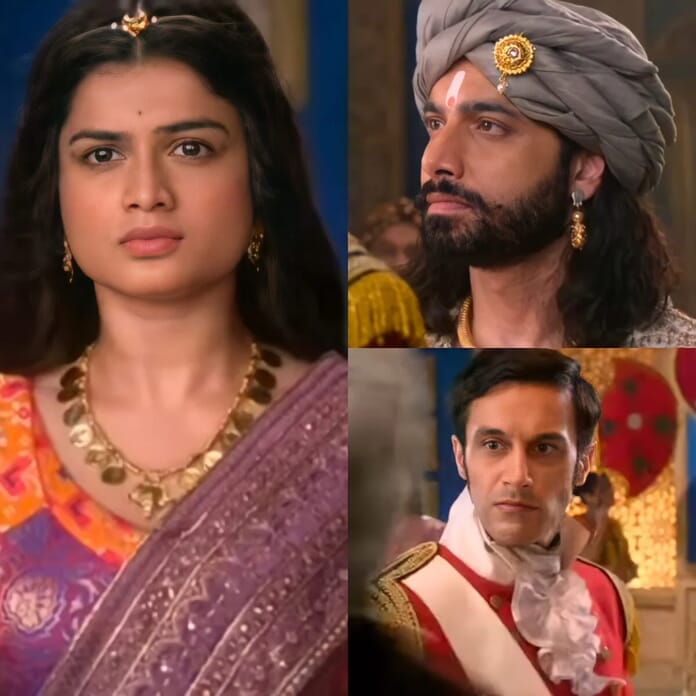 This week the storyline showcases that Baxi Jagabandhu get blessed with a baby boy but soon his friend Bahubali notify him about the British attack. Baxi left his family to fight for his king but even after giving tough competition to the rival, he lost the battle and their king gets captured. Meanwhile, Baxi also got injured. When he gets concious he becomes shattered learning about his newborn baby’s death. He mourns with his family, but soon gathers himself and determines to bring their king back.

Here, Baxi’s wife Radha gives him strength and then suggest him to marry someone else who can give him heir, but he denies. She also shares it with her mother-in-law, but she also neglected it reminding about the love of Baxi for her.

Kalyani, the princess of Badamba practices with her sword and then makes her younger brother ready for his crown ceremony. Whole kingdom rejoices, while Major Geoffrey comes there with his soldiers and interrupts them.

Major Geoffrey threatens King Badamba to have a private conversation and gives him time-limit to accept his deal. He warns the king that if he denies then the concequences will be scary. He leaves, while Kalyani hears their conversation hiding behind and declares that someone will surely come to destroy the Britishers.

Elsewhere, Baxi and Radha helps the people of their kingdom, while Gadadhar’s wife provokes him against his brother. He and his wife taunts Baxi and Radha, while Subarna supports Baxi.

Geoffrey gets questioned by his senior about his Indian roots, while latter expresses his hatred. His senior promotes him and ask to release the King Ganpati and ask to sell his palace. Geoffrey tells about his conditions before accepting the orders, while his senior agrees for it.

Baxi gets elated learning about the news of their king’s release and goes to bring him back along with his soldiers. They all gets shocked and furious after seeing the way Geoffrey treated their king. He declares that there is no right of the king on the temple, while Baxi and his soldiers bring their king back.

Ahead, Radha gives strength to Baxi hearing his oath to fight against Britishers. While, he gets emotional stating that she have to sacrifice so much for him, while she comforts him.

Geoffrey orders Charan Patnayak to make an announcement, while latter gets shocked after hearing him.

Kalyani ask her father not to accept Geoffrey’s deal, while latter says that he don’t have any other choice to protect his kingdom. At that time Geoffrey comes there while Kalyani faces him fiercely and denies his offer. He warns her but she stays firm in her decision. He states that she have to pay the concequences and leaves, while others scolds her. She defends herself stating that she won’t let her kingdom fall weak. They ask her to apologise to Geoffrey, but she denied.

Further, Radha caught Gadadhar trying to steal and confronts him. He express his disappointment regarding the way his family treats him and says that they are biased. Radha tries to make him understand to handle the situation, while he asks for his share of property. Radha apprises Subarna about it. At that time her parents comes there. They advice Baxi to tell their king to accept Britishers offer, but Radha rebukes him and supports her husband. Her father understands and says that he won’t interfere in between their matter.

Baxi receives the letter from Britishers and gets furious reading that they can’t able to serve their king anymore. He denies to accept it and goes to face Geoffrey. While, Radha and Subarna prepares for the war.

Kalyani determines to fight against the Britishers. Whereas, Geoffrey and Baci comes face to face and wrestles with eachother. Baxi defeats Geoffrey, while latter provokes him against the king. Baxi gets shocked and goes to question Maharaja.

Kalyani gives courage to her brother and other kids too, who said that they are afraid of the Britishers.

Elsewhere, Baxi confronts Maharaja and learns that British betrayed him to get his sign on the papers. He declares a war but Maharaja stops him reminding about their failure and states that he is ready to compromise.

Baxi gets shocked and shares his worry with his family, while his mother advice him to take help from other kingdoms. While, Baxi plans to go to Badamba. Whereas, Charan gets this information and apprises Geoffrey about it.

Geoffrey kidnaps some innocent kids. Meanwhile, the people of kingdom goes to seek help from Kalyani, while she promises to bring the kids back safely.

Ahead, Geoffrey visits Kalyani and have a private conversation with her. He warns her about harming the kids along with her brother, if she accepts to tie up with Baxi.

Subarna and Radha prays for Baxi and later Subarna confronts Gadadhar about his insecurities. He lashes out on her making her house with his words.

Here, Kalyani keeps an eye on her kingdom’s entrance along with her soldiers. At that time Baxi comes there and she gets suspicious about him.she stops him and declares a fight. They both fight against each other and then their faces gets revealed.

Baxi tells about his purpose, while she denies to do partnership with his kingdom. She taunts him, while he warns that the same thing can happen with their kingdom also. She gets afraid remembering Geoffrey’s warning and requests Baxi to leave.

Now in the upcoming episode, Radha will pray for Baxi’s success and will keep fast for him. Whereas, Baxi and Kalyani will meet again. Baxi will return back to Radha and notify her about Kalyani being stubborn. Meanwhile, Kalyani will discuss about Baxi, while others will tease her. Lot more drama and twists to come in Vidrohi, don’t miss watching the show.