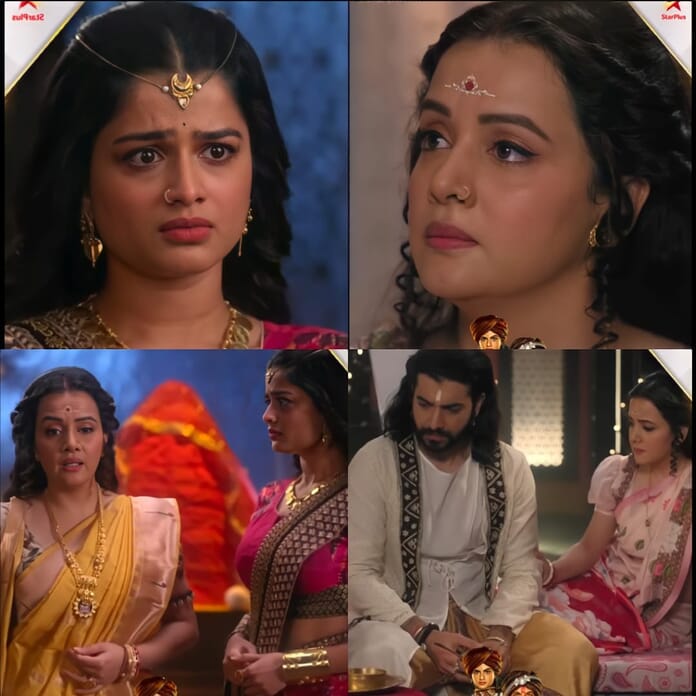 Star Plus newly launched historical show “Vidrohi” is going for a dramatic turn of events, to keep the audiences hooked to their television screen.

This week the storyline showcases Baxi blaming himself for Radhamani’s condition and decides to tell her the truth about his and Kalyani’s marriage. Meanwhile, Kalyani tries to comfort him and ask not to blame himself. Meanwhile, Radha’s mother sees them and gets furious at Kalyani. Later, she warns Kalyani to stay away from Baxi and reminds that he is Radha’s husband.

Here, Tilottama gets the letter and ask Gadadhar to read it, but at that time Subarna comes there and scolds them for being insensitive. She takes the letter and gives it back to Radhamani.

Radha gets concious while Baxi becomes elated. Kalyani and him starts blaming themselves for Radha’s situation, while she gets confused and tells them that she got unconscious without reading Badamba Naresh’s letter. They both concludes that Radha doesn’t know about the truth and changes the topic.

Elsewhere, Radha sees the letter and starts reading it, she gets shocked learning about Kalyani’s marriage and confronts her about the same. Kalyani breaksdown and tells about the circumstances in which she got married. Radha comforts Kalyani and ask about her husband’s name, at that time Kalyani realises that Radha doesn’t know that she got married to Baxi.

Kalyani tells Radha that she can’t tell her husband’s name. Meanwhile, Radha assures her and says that she will pray for Kalyani and her husband tk get reunite. She also questions that why Kalyani doesn’t wear any bridal ornaments? To which latter replies that she and her husband doesn’t consider the marriage and have done it only for a deal. She also request Radha, not to tell anyone about her marriage. Radha agrees to her and encourages her that soon everything will get fine.

Ahead, Radha’s mother sees her with Kalyani and tries to instigate her against Kalyani, but Radha takes stand for her and ask her mother not to interfere in between them. Meanwhile, she burns the letter to hide about Kalyani’s marriage.

Radha shows sympathy towards Kalyani and prays for her. Whereas, Tilottama comes there to get information about the letter but Radha denies to tell anything about it.

Further, Tilottama asks Gadadhar’s help to find the truth about the letter. He tells her a plan to get the truth out of Kalyani’s mouth. She agrees to do it and does as per his plan. She tries to trick Kalyani but latter catches her lie and fooled her instead.

Kalyani tries to find Baxi in order to tell him about her and Radha’s conversation, while Subarna notify her that Kalandi is leaving. Baxi and Kalyani meets Kalandi, who asks Baxi to look after Kalyani, while latter assures him that she will be fine.

Later, Radha murmers in her sleep about Kalyani’s marriage and husband while Baxi gets shocked thinking that Kalyani have revealed the truth to Radha. He gets furious and confronts Kalyani about it. He scolds her for being insensitive and breaking their promise.

Kalyani also gets angry due to his allegations and interrupts him. She tells him that how Radha read the letter and got to learn about her marriage but doesn’t know who her husband is. She tells about her sacrifices to Baxi and scolds him for calling her insensitive. She says that she is doing everything just for Radha and her baby.

Here, Kalyani gets angry with Baxi by remembering his outburst, while he regrets doubting her. Later, Radha tells Baxi about Kalyani being married, while he nods stating that he knows about it. She gets shocked and ask that why he haven’t told her regarding it.

Radha gets stunned learning that Baxi have hidden something from her and ask if their relationship starts getting weak? He tries to make her understand that he was bounded by promises but she tells him that she never have considered him apart from her and had never hidden anything from him.

Meanwhile, Kalyani tries to calm Radha and ask her to forgive Baxi as he was bounded by promises. Radha makes Kalyani understand that trust is the base of a relationship and if there is no trust then relationship starts falling.

Kalyani tries to divert Radha’s mind and insists her to play game. She then starts taunting her husband intentionally looking at Baxi, while Radha agrees to her. Whereas, Radha’s mother gets anxious seeing Kalyani with Radha.

Ahead, Kalyani ask about the Puja while Radha’s mother talks to her rudely. Kalyani replies back to her in the same tone, while Radha’s mother tries to warn Subarna to keep Baxi in co trol but latter doesn’t get her hint. Meanwhile, Subarna notify Kalyani about the importance of the Puja, while latter decides to do it for clearing the misunderstanding in between Baxi and Radhamani.

Kalyani ask Baxi to apologise to Radha as he have hurted her. She blames herself for coming in between them. Whereas, Baxi accepts Kalyani’s suggestion and apologises to Radhamani. She sees his guilt and forgives him, asking not to lie to her ever.

Kalyani discusses about the Puja with Baxi and ask his help to let Kalyani also perform it without getting noticed by anyone. Meanwhile, Kalyani gets happy seeing them reconcile, but ask Radha not to force her to do Puja for her husband. Meanwhile, Kalyani and Baxi both taunts eachother.

Here, Kalyani gets furious at Baxi and decides not to keep fast for him ever. She goes to eat but couldn’t get anything. Meanwhile, Radha’s mother decides to keep Kalyani out of her daughter’s life and writes a letter to Badamba Naresh lying that Kalyani is not happy with them and insists him to take her back. She sends the letter to Badamba Naresh via a guard.

Tilottama gets romantic with Gadadhar, while Amba gets furious seeing it. He tries to convince Amba stating that he loves her more, while she ask him to prove it by doing Puja with her before Tilottama.

Radha starts celebrating Puja with other married womens. Meanwhile, Amba ask not to keep fast as it will affect the child, she tries to feed Radha but latter denies. At that time Kalyani comes there and makes Radha understand that how important the child is for them, she makes Radha eat the fruits and cheers her up.

Elsewhere, Radha shows her worry regarding Baxi’s health and notify Kayani that when once she haven’t kept the fast for him, then how he got badly injured in a war. Meanwhile, Baxi comforts her stating that nothing is more important then her and their baby.

Kalyani decides to keep fast for Baxi for Kalyani’s sake. She notify Kalyani about it, while latter teases her if she had fallen in love with her husband. Kalyani and Baxi looks at each other feeling awkward. Meanwhile, Radha gives the bridal jewelleries to Kalyani asking her to wear it during the ritual. She also assures that Baxi will help her in performing it, without letting anyone see her.

Later, the ritual gets started and all the married womens started performing it. Elsewhere, Kalyani comes towards Baxi to start the ritual, while he keeps looking at her.

Now in the upcoming episode, Kalyani will perform the ritual while Baxi will keep staring at her. Later, she will ask him to see each other’s face in the plate as it is auspicious. Meanwhile Radhamani will come there and gets shocked upon seeing them. Lot more drama and twists to come in Vidrohi, don’t miss watching the show.