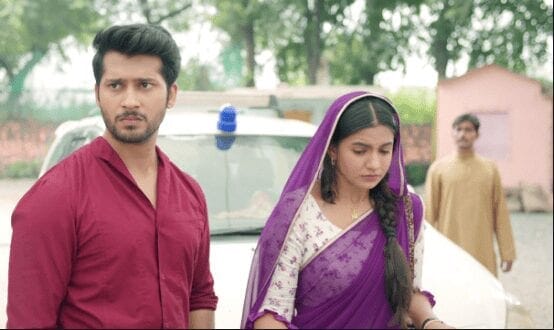 The episode starts with Vidya revealing Prem that she has stolen the money. She says about Nanku cheating the kids parents extracting money from their parents. She stole the money to give it to the kids but now she don’t even have the money. She’s about to leave but Prem stops her.

On the other hand Avtaar is following Dm. Soon Nanku’s men catch Dm. Dm pleads them to leave him as he’s on his way to meet Nanku only. They snatch the phone from him and toss it into the river. In the meantime Bablu comes home and informs about Avtaar not at home. He also says about Vidya being there during Dm’s presence. Dharma gets worried. Vidya’s mother locks them all up in a room and says that she’ll reveal to everyone that it’s them who forced Vidya to do all this.

Dm is brought to Nanku. He holds his collar when Dm asks him to listen to him once. Nanku slaps him and says that his time is over and slaps him again for calling him a liar. Jagat provokes Nanku to kill him. He says that ge will take the car to garage and will sell its parts. Avtaar throws Dm into waters. Jagat finds the envelope with money and shows it to Nanku. Nanku gets furious he looks at crocodile approaching Dm. He smiles seeing it and Avtaar watches all shocked. He gets worried about getting exposed.

On the other hand Prem reveals that he was following her to get to know all the problems of Aazamgarh. He reveals that he’s not Prem but Vivek Vardhan Singh, the new district magistrate of the place. Vidya gets shocked and recalls Dm’s words. Nanku wants to know about who gave the money to him but before that crocodile kills him. Jagat asks him to discuss everything at home.

Vivek says that he followed her as she was sincere in her job unlike others. He says that people blame government if anything wrong happens but it’s actually people like Nanku who’s spoiling the system. He says he bribed every official and pleads her to reveal all of Nanku’s deeds as he needs proof against Nanku.

Vidya says that she can’t help him as she’s afraid to go against Nanku. Vivek says her that if educated people like her for Nanku how could they save the innocent children’s life. Vidya gets worried about her illiterate state and is about to move away but slips. Vivek tries holding her hand and they both falls down. Vidya gets up and leaves immediately.

Dharma argues with Vidya’s father and both family fights. Vidya while leaving gets stopped by Nanku. He offers to give lift to her but Vidya refuses it. She says that she can understand his intentions and asks him to stay away from her. Nanku gets furious that Vidya who was afraid of him answered him back. Jagat says that DM, Vidya and Avtaar were together before and they were planning something against him. Nanku gets into thinking.

Avtaar comes to home and informs everyone about whatever happened. He asks them to not reveal anything to Vidya. He promises Vidya’s mother that he will protect Vidya. Vidya comes home and informs about Prem’s true identity shocking everyone.
Precap : Vivek says Vidya that Dm sharma us missing and Nanku is the prime suspect.