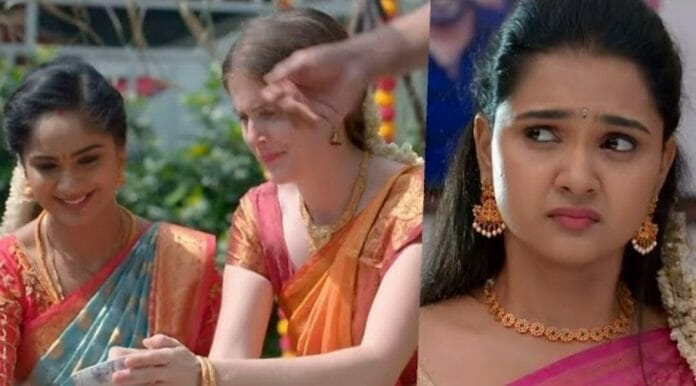 Zee Tamil’s popular show, Vidya No1, is gearing up for drama with Vedavalli giving a task to Vidya to prove her.

Vedavalli grew suspicious and asked Vidya to show her study certificate. Vidya lied that her certificates were in her village. Chandramohan helped Vidya by supporting her. Chandramohan asked Vedavalli to give Vidya a chance to prove herself.

Vedavalli agreed and said to Vidya to convince the foreign clients who were going to visit their house the next day else to leave the house. Vidya accepted the challenge. Sanjay helped Vidya to prepare the presentation. Preethi created obstacle by turning off the main switch box. The family helped Vidya and Sanjay.

In today’s episode, it was seen that the foreign investors arrived at Vedavalli’s house. They were impressed to see the kolam made by Vidya in front of the house. The foreigners investors were curious to know about Pongal celebration.

Preethi tried to impress the investors by explaining them about the pongal festival, but she failed as she didn’t know much about the festival. Vidya explained them the reason for celebrating Pongal and drawing kolam. The investors are impressed.

Later, Preethi arranged a designer for the costumes of the foreign investors, but they wore traditional Indian dress with the help of Sanjay and Vidya which irked Preethi.

What will happen next? Will Vidya win in the challenge given by Vedavalli?