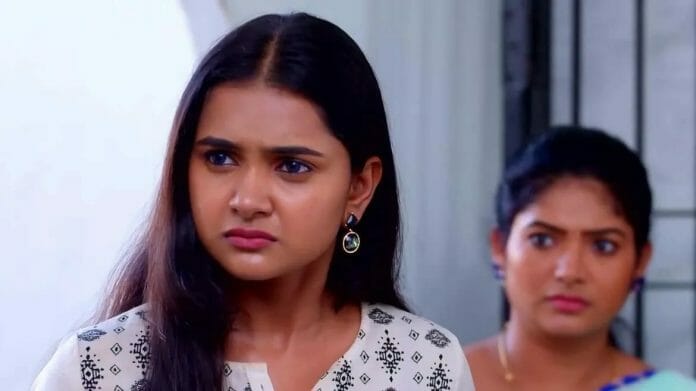 Zee Tamil’s popular show, Vidya No1, is gearing up for drama with Preethi going to Vidya’s village to find out truth about the real Vidya.

Previously, it was seen that Vedavalli offered a blank cheque to Satya (fake Vidya). The latter teared it up in front of Vedavalli who was glaring at her. Preethi sent goon to kill Satya. But Satya beat them. Later, Sanjay, Vidya and Vijay met Suryaprakash and asked about the fake Vidya.

Suryaprakash revealed that he had hired Satya who was an actress by profession to act like Vidya in order to protect her real identity. Preethi doubted that Suryaprakash ttriedto save real Vidya, so he brought a fake India. So she went to Vidya’s village to find out if the girl who claimed to be Vidya was really Vidya.

In today’s episode, it’s seen that Vidya’s friend, Valli spots Preethi and his friend enquiring the villagers about Vidya. She phones Vidya to tell the same. Vidya asks Valli to handle her. Valli lies to the vullagers that Preethi and her friend are related to the guy who tried to marry Vidya to sell her after wedding.

The villagers attack Preethi and her friend. They run getting sacred. Preethi remembers that everyone telling about Vidya mortgaging her land to prevent Vedavalli’s college being sealed. She goes to the register office. She bribes the register and gets a copy of Vidya’s land papervin which Vidya’s photo sticked.

Preethi decides to expose Vidya. But her friend cautions her that Vidya can prove this proof too as fake. Preethi thinks and plans to throw Vidya out of the house as Vani after her wedding with Sanjay.

Can Preethi succeed in her intention?