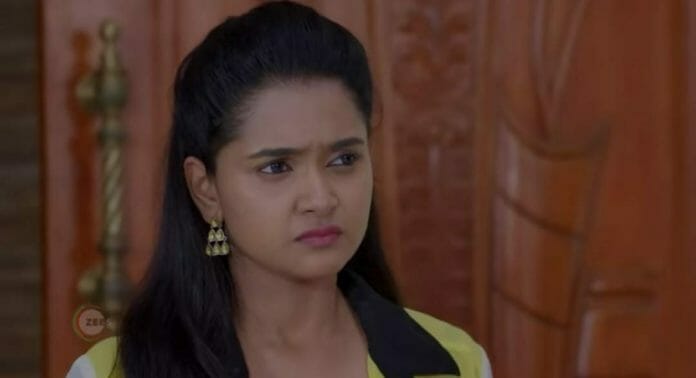 Zee Tamil’s popular show, Vidya No1, is gearing up for drama with Suryaprakash bringing a fake Vidya to protect the real Vidya’s identity.

They wondered who could be the girl who was claiming to be Vidya while the real Vidya was with them. They went to the police station. A girl (Anita Sambandh) came in front of Vedavalli and said that she was Vidya. Suryaprakash signed Chnadramohan.

Sneha saw this and understood that this was Suryaprakash’s plan to hide real Vidya’s identity. The fake Vidya challenged Vedavalli to marry Sanjay and teaching Vedavalli good lesson.

Preethi denied that she’s not Vidya. She added that she is Sanjay’s would-to-be wife. Vedavalli confirmed the same. The fake Vidya mocked Preethi. The latter tried to slap the fake Vidya. But she held Preethi’s hand.

In today’s episode, it’s seen that Vedavalli offeres a blank cheque to Satya (fake Vidya). The latter tears it up in front of Vedavalli who is glaring at her. Preethi sends goon to kill Satya. But Satya beats them.

Later, Sanjay, Vidya and Vijay meets Suryaprakash and asks about the fake Vidya. Suryaprakash says that he hired Satya to act like Vidya in order to protect her real identity.

Preethi doubts that Suryaprakash tries to save real and brought a fake India. So she goes to the village to find out if the girl who claims to be Vidya is really Vidya.

Will Preethi finds out Suryaprakash plan.