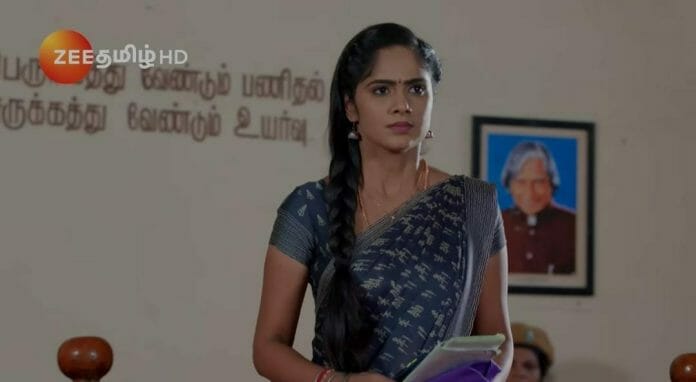 Zee Tamil’s popular show, Vidya No1, is gearing up for drama with Vidya bringing the proof to the court.

Vidya asked Karthik to go and assured that she would get the agreement. Karthik left. The next morning, in the court, Karthik and Suryaprakash waited for Vidya and asked few hours extension. Vidya reached the court, but stops seeing Vedavalli waiting in the car. As Vidya didn’t reach, the judge declared Manasa culprit and announced her sentence.

In today’s episode, it’s seen that Preethi is shocked to learn that Vani is Vidya. The latter says to the judge that Abhishek didn’t attempt suicide. Vidya shows a video recording in which a drunk Abhishek confessed that he faked a suicide attempt and admitted forcing Manasa to sign the agreement.

The judge declared Manasa innocent and gave a six months sentence. The judge praises Manasa’s advocate to reveal the truth. The advocate gives the credit to Vidya. The judge appreciates Vidya. Preethi records the video of Vidya to prove to Vedavalli that Vani is Vedavalli. Meanwhile a lawyer tells Vedavalli what happened inside.

Preethi’s phone falls down and Abhishek takes Preethi out hurriedly as a culprit creates a chaos there. Vedavalli glares at Preethi and Abhishek and drive off.