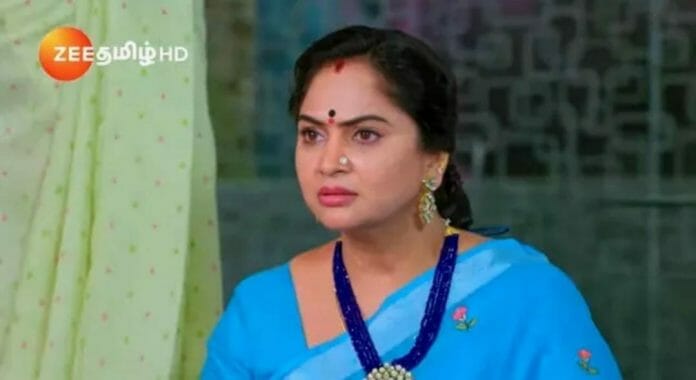 Zee Tamil’s popular show, Vidya No1, is gearing up for drama with Vedavalli getting shocked with the astrologer’s revelation about Sanjay.

Previously, it was seen that Vedavalli had called home the astrologer who had written the jadagam of Vedavalli’s children to know about their future as many unpleasant incidents took place in the family recently. Vedavalli gave the astrologer Sanjay’s jadagam to fix Sanjay’s wedding with Preethi.

The astrologer asked if they got divorce from Sanjay’s first wife which confused everyone. Preethi asked why they should get divorce from Sanjay’s first when he never got married. The astrologer said that according to Sanjay’s Jadagam, he was already married which shocked everyone. Sanjay and Vidya were scared that their secret marriage truth will come out.

However Vedavalli refuses to believe that Sanjay can marry a girl secretly. She asks the astrologer to say if Sanjay and Preethi’s wedding will happen. The astrologer asks Vedavalli to ask this question to their Kuladeivam. He tells three ways to get the answer and the first two should be done by Preethi.

Preethi agrees to do it. Vedavalli plans to the trip to the temple with the family. Shankunthala and her son learn this. They plan to kill Vedavalli and her family during this trip. Their man disguises as a mechanic and damage the brake wire of the van in which Vedavalli will travel.