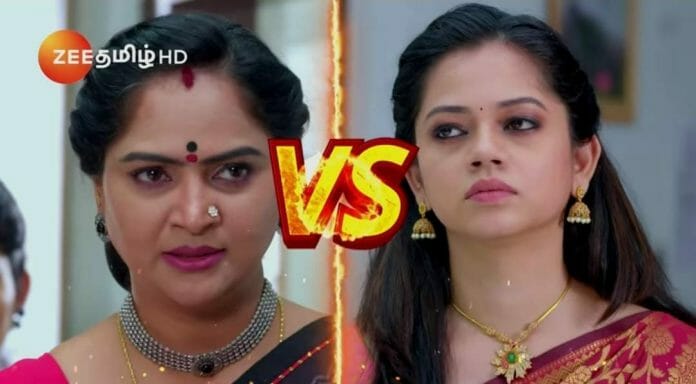 Zee Tamil’s popular show, Vidya No1, is gearing up for drama with Preethi getting the proof to prove that Vani is Vidya.

Previously, it was seen that Preethi told to Vedavalli that Vani was Vidya. Chnadramohan, Sanjay and Vijay denied this. Even Vidya hid her identity and said that she’s Vani. Preethi played the video of Vidya witnessing in the court by calling herself Vidya on the TV screen which shocks everyone. Vedavalli got furious and raised her hand to slap Vidya, but Chandramohan held her hand.

They wonder who is the girl who is claiming to be Vidya while the real Vidya is here. They go to the police station. A girl (Anita Sambandh) comes in front of Vedavalli and says that she is Vidya. Suryaprakash signs Chnadramohan. Sneha sees this and understands that this is Suryaprakash’s plan to hide real Vidya’s identity.

The fake Vidya challenges Vedavalli to marry Sanjay and teaching Vedavalli good lesson. Preethi denies that she’s not Vidya. She adds that she is Sanjay’s would-to-be wife. Vedavalli confirms the same. The fake Vidya mocks Preethi. The latter tries to slap the fake Vidya. But she holds Preethi’s hand.

How will Vidya and Sanjay react to Suryaprakash’s this plan?