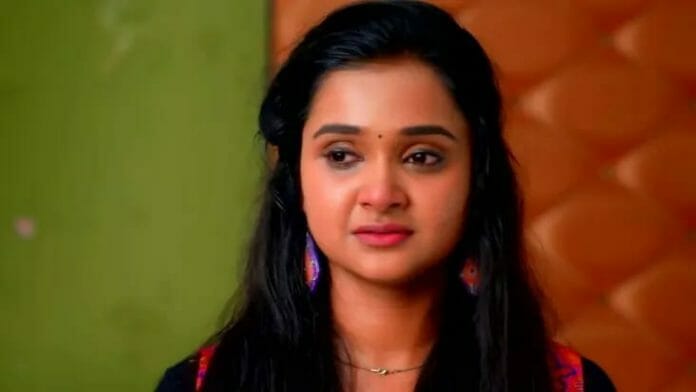 Zee Tamil’s popular show, Vidya No1, is gearing up for drama with Preethi faking a suicide attempt to gain Vedavalli’s support.

Previously, it was seen that Vidya cleverly provoked Preethi and made her confess that she’s married John and left him to marry Sanjay. Manasa recorded the video of this in her phone. Preethi was shocked to learn this. She begged idya to delete the video and promised not to tell Vidya’s truth to Vedavalli.

However, Vidya wanted to expose Preethi and threw her out of the house, so that they could sort out their family matters among themselves. Vidya and Manasa went to talk to Vedavalli.

Preethi put on an fake suicide attempt and gained Vedavalli’s sympathy. Vedavalli refused to listen to Chandramohan who tried to make her understand that Preethi was doing drama.

In today’s episode, it’s seen that Vedavalli states that she will accept an uneducated Vidya as her daughter-in-law. She asks all of them to come to the hall as she has a big announcement to make. She leaves.

Preethi boasts of her suicide drama in front of Vidya and Manasa. She says that Vedavalli is like her puppet now and adds that they can’t do anything against her.

Later, Vedavalli shocks everyone by announcing that Preethi is her business heir. She adds that she will look after the business after her which shocks the whole family. Chandramohan, Sanjay and Vijay express their disagreement against Vedavalli’s reaction, but Vedavalli stays adamant in her decision.

What will happen next? What will Vidya do now ? Will Vidya be able to expose Preethi’s truth in front of Vedavalli?