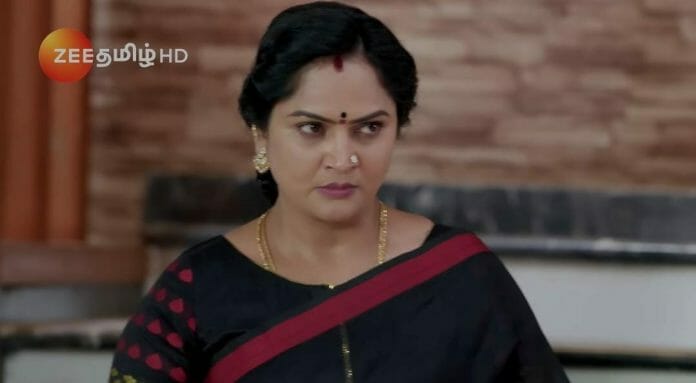 Zee Tamil’s popular show, Vidya No1, is gearing up for drama with Preethi revealing to Vedavalli that Vidya helped Manasa and Karthik to get married

Previously, it was seen that Preethi said to Vedavalli that Vani could be Vidya. Chandramohan tried to save Vidya by diverting Preethi, but in vain. Preethi brought the register home to prove Vani was Vidya. Vidya was asked to bring water. Vidya took time to get the water as she was scared to get caught.

Later Chandramohan was furious that Vedavalli refused to bail Manasa out. Vidya said to Chandramohan that he always told that Vedavalli was successful because of the money her parents gave and never appreciated her talent which created a hatred for her and her family. Vidya decided to Vedavalli the truth that she was Vidya.

In today’s episode, it’s seen that Chandramohan encourages Vidya to reveal her real identity to Vedavalli while Sanjay and Vijay try to change Vidya’s decision as they are scared that Vedavalli can shoot Vidya.

However Chandramohan assures Vidya to protect her from Vedavalli. The next day, Vedavalli urges Sanjay and Vijay to find Vidya and gives them time till the end of the day. Preethi brings Vidya’s aunt Lila to Vedavalli.

The latter threatens Lila with her gun and asks her to tell Vidya’s whereabouts. Surya Pradesh enters when Lila is about to tell Vani is Vidya and stops Lila from telling the truth.