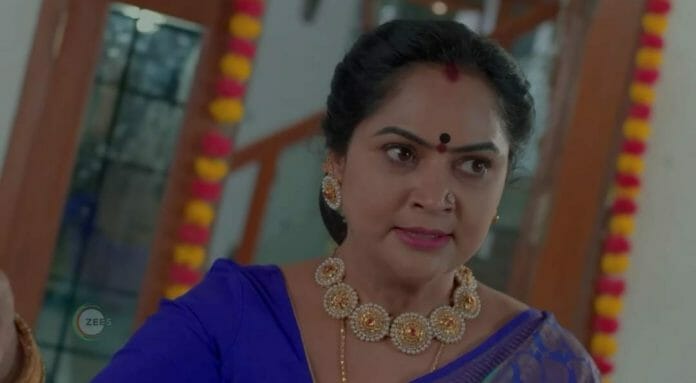 Zee Tamil’s popular show, Vidya No1, is gearing up for drama with Vedavalli refusing to accept Vidya as her daughter-in-law.

Previously, it was seen that Vedavalli refused to accept Vidya as her daughter-in-law and tried to remove the nuptial thread from Vidya’s neck to ask Sanjay to tie it around Preethi’s neck. But Vidya held Vedavalli’s hand shocking everyone.

Vidya opposed Vedavalli’s decision and refuses to remove the nuptial thread and said that she’s ready to die for that. Chandramohan, Suryaprakash, Vedavalli’s sister and Mayi tried to convince Vedavalli to accept Vidya as her daughter-in-law, but Vedavalli angrily walked away.

Later, Vidya was disappointed that they all got her married to Sanjay by cheating and turned her against Vedavalli. Chandramohan, Suryaprakash and the family try to make Vidya understand that they didn’t have any other way. Preethi vowed to make Vidya leave Vedavalli’s house and Sanjay’s life.

In today’s episode, it’s seen that Vedavalli recalls all the happenings took place in the wedding venue and wonders who could have helped Vidya when she locked Suryaprakash in the room and strictly ordered the gaurds not to permit her inside.

She recalls Vidya ( Satya) challenging her to marry Sanjay in the police station and wonders why she didn’t come to the wedding mandap. She wonders if someone from the house help Vidya. Vedavalli doubts if Vani ( Vidya) is on the side of Vidya (Satya).

Meanwhile, Vidya, Sanjay and the family arrive at home. Sanjay hesitates to enter the house fearing Vedavalli’s reaction. As Manasa, Vedavalli’s sister are scared of Vedavalli, they refuse to welcome Vidya-Sanjay by taking aarti.

What will Vidya do to win Vedavalli’s heart? Will she be Successful?