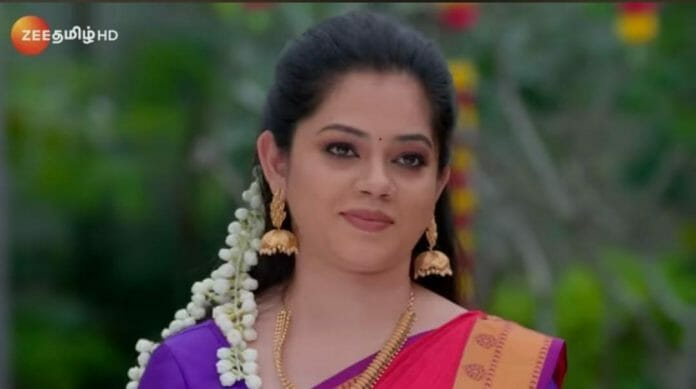 Zee Tamil’s popular show, Vidya No1, is gearing up for drama with Vidya’s name getting printed on Sanjay and Preethi’s wedding card.

Previously, it was seen that Vedavalli slapped Vijay for not answering her calls. Vijay defended himself saying that he was busy in distributing wedding cards. Vedavalli revealed about Vidya’s name had printed on the card instead of Preethi’s name which shocked everyone.

Chandramohan convinced him to get ready. Preethi and her friends we were locked inside the room and sen Satya who had pretended to be Vidya in front of Vedavalli earlier, by covering her head. Chandramohan urges Sanjay and the duplicate Vidya to dance. They obliged. Duplicate Vidya’s veil fell and Vedavalli was shocked to see her in the place of Preethi.

In today’s episode, it’s seen that Preethi sees in live video Fake Vidya and Sanjay dancing in the mehndi ceremony. She manages to get out of the room and arrives there.

A furious Preethi complains to Vedavalli that Vidya locked her inside the room and came in her place covering her face. She tries to slap Vidya, but the latter bends and Preethi slaps her mom. Vedavalli asks her guards to throw Vidya out of the house. Just then Suryaprakash arrives and warns the guard not to touch Vidya.

Suryaprakash demands Vedavalli to call off Sanjay and Preethi wedding and get Vidya married the Sanjay. He asks how Preethi is better than Vidya. Vedavalli says that Vidya is uneducated.

Suryaprakash suggests having a competition between fake Vidya and Preethi to know who is better and surprisingly Chnadramohan supports Preethi.

Who will in this competition?