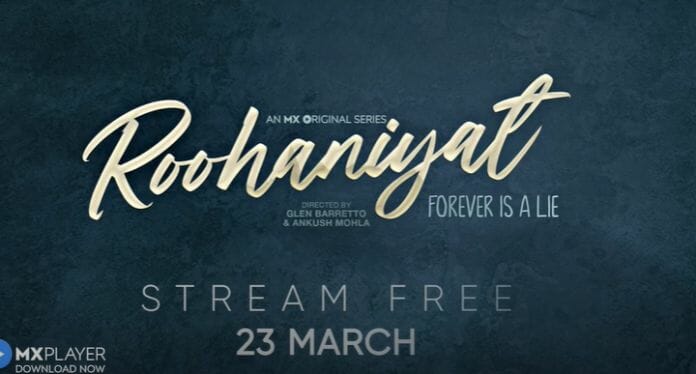 Actor Arjun Bijlani and Kanika Mann is coming together to treat their fans with their upcoming web series MX player originals Roohaniyat. The trailer of the upcoming is getting positive response. ‘Forever Is A Lie’ and ‘Forever Is Not A Lie, Mister’ has become a sensation. This catchphrase is breaking the internet. Fans are looking forward for the series.

According to the trailer of the show, Prisha accidentally meets with Saveer. Saveer has a dark past which resist him from falling in love all over again. He later confesses Prisha reminds him of someone. Other hand, Prisha gets ditched by her boyfriend Rishi. She yet believes ‘Forever is not a lie and Love is not a joke’. Saveer and Prisha falls for each other, well to know more stay tuned to MX Player as Roohaniyat will premiere 23rd March, 2022. Check out the show!

This looks promising. Add in your watchlist!

Actor Arjun Bijlani was last seen in Khataron Ke Khiladi season 11. He lifted the seasons trophy. The popular actor rose to fame with its first show ‘ Mile Jab Hum Tum’. He played the character of Mayank in the show and became popular for bringing the life to the role. Arjun has been a part of famous shows that includes ‘Left Right Left’, ‘Kaali ek Punar Avtar’, ‘Meri Aashiqui Tumse Hi’ among the others.

In the year 2015 he marked his presence in supernatural show ‘Naagin’ alongside Mouni Roy. The show became superhit in the presence of the actors. As Ritik, hunk earned the separate fan base. There is no look back for Arjun. His stint in romantic thriller ‘Ishq Mein Marjawan’ was outstanding. Actor burned the screen with his flawless performance as Deep Raichand. He was paired opposite to Alisha Panwar and Nia Sharma in the show.

Currently, Arjun is seen in Star Plus reality show ‘Smart Jodi’ with his wife Neha Swami.

Coming to Kanika, actress is best known for playing the character of Gundan in Zee show ‘Guddan Tumse Na Ho Payega’. She is seen in famous music videos

Her fans are exited for see her in Roohaniyat stealing the show as Prisha.