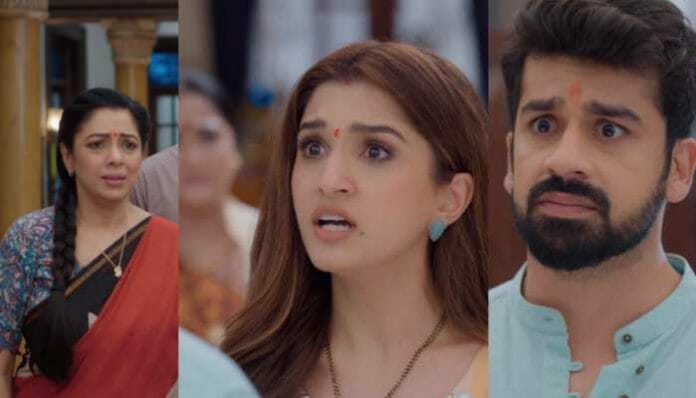 Kinjal will try to escape Shah house. What Kinjal is upto?

In today’s episode, Anupama puts Kinjal to sleep. She prays to God to look after. Anupama sends a voice note to Anuj and Anu. Kavya bring tea for Anupama. She thanks Anupama for handling matter at Shahs house despite so much insult. Anupama feels glad someone said thank you. Kavya asks Anupama to go back home post Kinjal wakes up. Dolly sits aside Kinjal. She worries about handling Kinjal in Anupama’s absence.

Anupama asks Leela if she needs anything. Leela asks Anupama to give her poison. Vanraj asks Leela to calm. Pakhi says Rakhi was silent despite knowing the truth but Anupama disclosed because she wanted to be popular. She accuses Anupama. Anupama asks Pakhi and Leela not to speak if they don’t know anything. She adds Leela must be thankful that she didn’t have to experience what Kinjal and she went too.

Pakhi says in the past Anupama snatched her family and now she has broken Arya’s. Anupama asks Pakhi to stop misbehaving. Pakhi says to Anupama that she could have excused Vanraj and Paritosh. Anupama says to Pakhi God forbid if she goes through the similar situation than she should excuse her husband. Pakhi says she can handle her matter. Anupama asks Pakhi to remember her word. She add she don’t visit Shah house to bear taunt rather she love the family thus she come. Leela asks Anupama not to come from next. Anupama asks Leela if she is sure. Leela sit mum.

In the upcoming episode, Kinjal will tell to Shahs about visiting Rakhi. Rakhi will stun Shahs post she will disclose she isn’t aware Kinjal is coming back to her. What Kinjal is hiding? Keep watching the show for more entertainment.