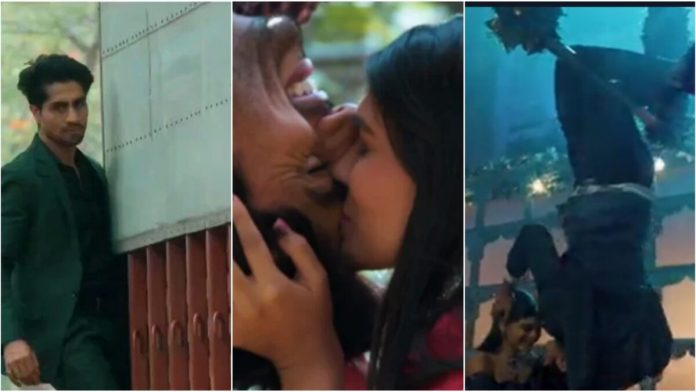 Harshad Chopda’s unusual stunts as Abhimanyu Birla in Yeh Rishta Kya Kehlata Hai is breaking the internet. Actor is probably the only one currently who is performing real stunts by himself. Harshad’s gym fit bod is surely another reason for the hunk to perform bizarre scenes with ease. From hanging on a tree to swing, to the recent truck stunt, Harshad’s stunt is remarkable and setting performance bar high. He is a TV star undoubtedly. Here we bring the stunts performed by Harshad in the longest running show, tell which one is your favorite:

This was probably the first time when Harshad’s stunt as Abhimanyu impressed the millions out there. His stunt was similar to the Hollywood movie Spiderman. Fans named him spidermanyu and compared him with Peter Parker. This upside love confession of Abhimanyu and Akshara went viral in no time. Harshad hanging on a tree throughout the scene for good 5-10mins and holding the expression was applauded. He is probably the only actor who can do such stunts without any complaint.

Engagement ceremony of Abhimanyu and Akshara was unique of its own kind. Abhimanyu re-created the tree hanging moment on a prop, yet again impressed Akshara and audience. The scene went viral and became talk of the town. Harshad flawless stunt in this scene was lauded.

The recent truck stunt by Abhimanyu took over the internet again. Fans just can’t stop talking about the stunt performed by their favorite actor by himself. Harshad’s stunts for the show is earning separate fan base. He is simply risking his life to deliver best entertainment to his huge fan following out there. Handsome hunk should be praised for doing stunts with utmost perfection.

Well, not only stunts Harshad Chopda’s ‘tandav’ sequences for Yeh Rishta Kya Kehlata Hai earned the separate fan base. Abhimanyu is not a typical ITV male lead. His stunts and tandav’s are setting new bars. Male leads are generally spotted breaking stuffs of their room in anger; Abhimanyu comes up with tandav and stunts to emote the emotions. All thanks to show creative for their experimental take. Harshad Chopda needs to be praised easily for extra-ordinary performance.