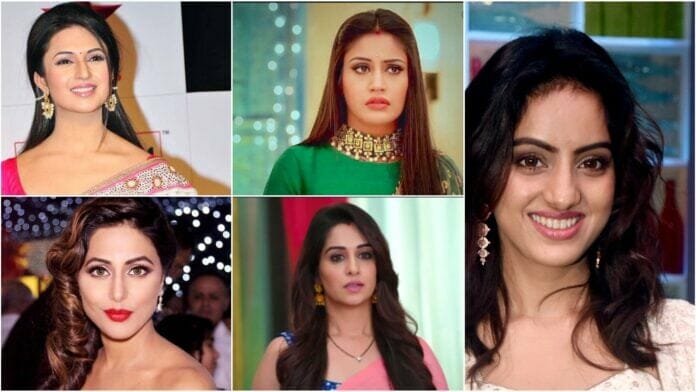 Each season beautiful, hot and sexy ‘Naagin’s’ captures our heart. Be it Mouni Roy, Surbhi Jyoti or Nia Sharma, the dazzling ITV divas in the supernatural series gains the audience’s attention with their flawless act.

Every season shows producer Ekta Kapoor unveils new Naagin and without a doubt they surely captivate us with their sizzling performances. With Naagin 4 coming to an end the audition for Naagin new season has already started. So, here we bring few suggestions for season 5. Tell, us whom do you want to become Naagin next!

Hina Khan never fails to impress us with any of her performance be it Komolika or Akshara. Undoubtedly, Hina is an amazing actress and has the capability to capture the heart. We don’t mind if she turns the new Naagin.

On work front, Hina Khan was last seen on television playing the character of Komolika in Kasauti Zindagi Kay.

Talented actress Surbhi Chandana has proved her skills by giving back to back hit shots in her so far shows. Right from playing Haya, Anika to Ishani; actress flaunted her different shades on-screen. And there is no doubt season 5 will become hit like the other seasons if Surbhi Chandana turns Naagin for the show.

On work front, Surbhi was last seen in Star Plus medical drama ‘Sanjeevani’. Actress played the character of Dr. Ishani in the show. She was paired opposite to handsome hunk Namit Khanna in the show.

The way Divyanka brings life to the character; she can fit in any role. Flawless actress whenever comes to the screen she just melt away the heart with her beauty. Last, she played Ishita who was kind at heart and gets angry often. If Divyanka performs Naagin; then surely we will be able to see her fiery shade.

On work front; Divyanka was last seen in Yeh Hai Mohabbatein playing the character of Ishita. Actress was paired opposite to heartthrob Karan Patel.

Stunning performer Dipika has already flaunted her amazing shades in Sasural Simar Ka which turned supernatural show later. If Dipika is given to play Naagin, there is no denial that actress will nail the character with her top notch performance.

On work front, Dipika Kakar was last seen in star plus show Kahaan Hum Kahaan Tum playing the role of Sonakshi Rastogi. Beautiful actress was paired opposite to Karan V Grover and duos chemistry together won millions of the heart worldwide. Show recently completed one year and fans expressed how much they miss the jodi of Dipika and Karan on-screen.

On work front, Deepika was last seen in Kavach.. MahaShivRatri. She was paired opposite to Namik Paul and fans adored her jodi with the actor.

So these are the few beauties that we think can ace the role of Naagin. Choose your favorite!