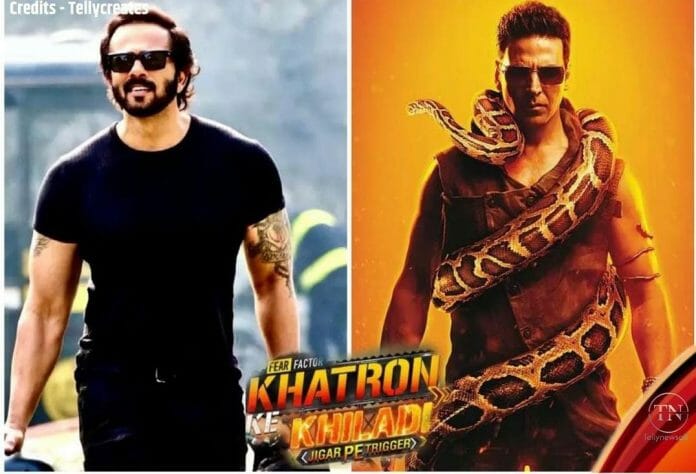 Colors TV most popular show Khatron Ke Khiladi season 12 is about to get launched and the shooting has already commenced for the same. Like previous times, many popular names are roped in for this season too. The contestants who signed up for this season includes Rubina Dilak, Pratik Sehajpal, Munawar Fariqui, Sriti Jha, Shivangi Joshi, Aneri Vajani, Nishant Bhatt, Kanika Mann, Rajiv Adatia, Mohit Malik along side Faizal Sheik, Jannat Zubair, Chetna, Tushar Khalia and Erica Packard.

The shooting for the new season commenced few days back. Reports are in that the shooting for the first task of the new season got completed. The first task is a face off task happened between two sets of pairs. The first set of face off was between Pratik Sehajpal and Faizal Sheikh where Pratik beat Mr. Faisu and emerged out as the winner. The second set includes Rubina Dilak and Erica Packard and Rubina defeated Erica in the face off round. As reports are to be believed in, Rubina Dilak and Pratik Sehajpal were the first winners of the new season of Khatron Ke Khiladi.

Rubina Dilak is a popular television actress knows for her works in Shakti Astitva Ki Ehsas ki, Devon Ke Dev Mahedev, Choti Bahu etc. She’s also a knows face among reality show audience as she emerged out as the title winner of popular reality show Biggboss season 14. On the other hand Pratik Sehajpal is mainly knows for his stunt in reality shows which includes Love School season 3,Ace of Space (2018), Mtv Rodies Extreme and Bigg Boss ott. Though a popular known face due to his previous reality shows, Pratik Sehajpal gained immense fan following after emerging out as a runner up in Biggboss season 15. Faizal Sheikh, fondly called as Mr. Faisu is an Internet sensation and one of the very few celebrities in India who crossed the mark of 27 million Insta followers for his page. Erica Packard is a known model who was featured in many renowned magazines like Harper’s Bazaar, Femina etc. She also did ramp walk for Many popular Indian Fashion shows and she’s the daughter of renowned actor Gavin Packard.

Buzz is that Akshay Kumar will host the upcoming season of Khatron Ke Khiladi 12 for few episodes and Rohit Shetty will host the further episodes. However there’s no confirmed news about the buzz.