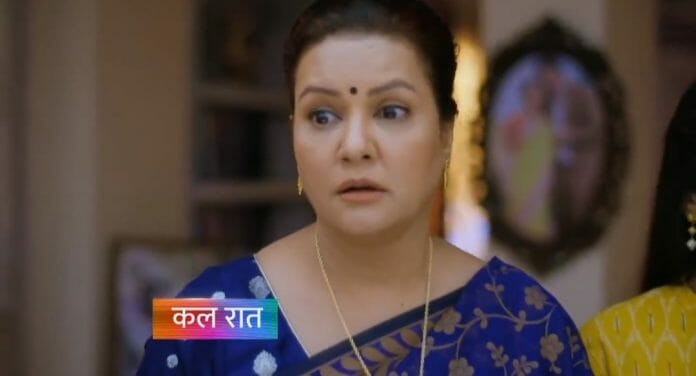 Star Bharat’s new show is gearing up for more drama as Dhanraj asks Kanha to complete Chiru’s wish and marry Sayuri. Kanha gets ready for this. What will happen now? What will Saroj do now?

In the previous episode, we saw Sayuri gets upset after hearing Saroj’s scolding. She goes out of the house. She comes to Indu’s house. Indu and the rest get happy seeing Sayuri. Sayuri hugs Indu. Sayuri further tells Indu that Saroj is angry with her. She says that Saroj has a right to be angry with her as nothing has happened according to her and the girl whom she hates has become the bahu of her house. Saroj tells Kusum that Sayuri has gone to her house and now she will be having food by sitting with them. Kusum sees Sayuri and says that Sayuri is not eating anything, maybe she has kept a fast.

Later Dhanraj comes to Kanha and tells him that he has not yet gone home for the pagphere ceremony. Kanha says that he does not know anything about this ritual. Dhanraj tells him that Sayuri must not have eaten anything yet. Kanha gets shocked hearing this. He wonders why Sayuri didn’t tell him anything about this. Here Sayuri is about to faint. But Kanha reaches there and takes care of her. He scolds her for not telling him about her fast. He says that if she had told him earlier, he would have come home early. Further Indu brings food for Sayuri. Kanha feeds Sayuri with food.

In the upcoming episode, we will see that Kanha will carry Sayuri in his arms. Saroj will see this and get angry. Later Pihu will come to Indu and give her surprising news. Indu will get worried.

What will happen next? Will Sayuri accept Kanha?