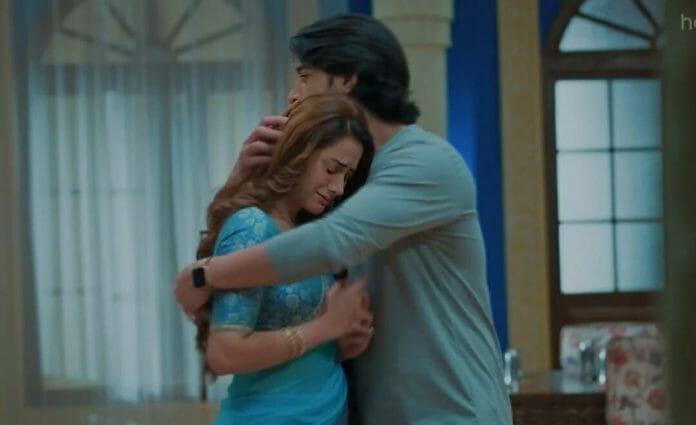 Previously we have seen that, Nakul and Kanha gets message that Rishi escaped from jail and rushed to their house. Kusum’s mobile got switched off due to low battery. Sayuri informed about the blunder happened to Kanha and both Kanha and Nakul rushed to search her. Saroj and Dadi blamed Sayuri for sending Kusum alone. Kanha and Nskul along with Rishi searched for Kusum.

Kusum acts smart and escaped from driver but Rishi caught her. She managed to send her location to Sayuri and Sayuri saved Kusum. However Sayuri would get hurt as Rishi pushed her on ground. Kanha, Nakul and Yash thrashes Rishi while Sayuri winces in pain. Kanha and Kusum rushes Sayuri to hospital who’s scared about the baby.

Everyone where heartbroken while Kanha goes in to break the news to Sayuri. He finds Sayuri speaking with her tummy and reveals the truth to Sayuri. Sayuri shouts in pain. Saroj blames Sayuri while others scold her.

In the future episodes we will witness, Sayuri treats the teddy like her baby. Kanha says it to Doctor. Sayuri will come home and will demand a grand welcome for her and her baby while everyone gets shocked.

Will Sayuri gets back from her trauma? Will Kanha and Sayuri blamed for Rishi’s death? Will Saroj mistreats Sayuri?