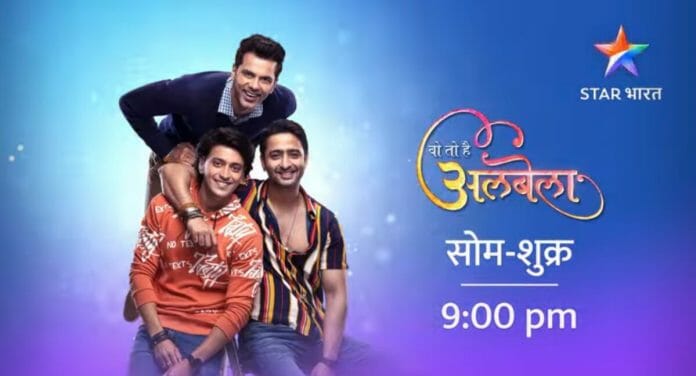 In the previous week we have witnessed, Kanha asked Sayuri what was she doing. He asked her if she was wearing sunblock or otherwise her skin would burn in this hot summer. He asked her to go inside the house. Sayuri said that she would go after finishing her work. Kanha started helping her. Kanha noticed Saroj. He asked her if she asked Sayuri to do all this. He said that she doesn’t consider Sayuri as her daughter in law. Thus she should not give her household work. Saying this, he left from there.

Saroj looked at Sayuri. She shouted at her and threw a knife at her. She asked her to kill her.She added that she killed Chiru and now taking Kanha away from her, so it would be better if she will killed her too. Sayuri got upset. She ran towards her house. She recalled that her mother was already very tensed. She wiped her tears and entered the home. Indu and others got happy seeing her. Indu said to her that she noticed that she was doing household work.

She asked her if Saroj gave her so much work in anger. Sayuri said no. She said that she was doing work because she was getting bored. Kusum got a marriage proposal and Saroj made her ready as groom’s family was about to visit her to see her for alliance. Saroj shared with Nakul that she believed Sayuri to be a bad omen and doesn’t want her presence during the ceremony.

Everyone felt uncomfortable when Sayuri stepped in praised Kisunu. They got offended and broke the alliance. Kusum again blamed Sayuri while others were glad that they got to know the true face of the alliance. Kanha tried consoling Kusum but she asked him to not let Sayuri anywhere near her when groom comes to visit her. Sayuri heard it all. Kanha went to check on Saturday as he heard from Nakul that she didn’t have food only to find her fainted.

She rushed her to hospital where the Doctor told that she was terrible ill as she neither had proper food nor water but overworked herself so much. Indrani confronted Kanha for not able to keep his promise. Kanha pleaded her to let him stay with Sayuri for the night. Saroj called Anjali and filled her ears against Sayuri.

Kusum informed Saroj about Kanha staying with Sayuri and Saroj fumed more. She cursed Sayuri and Dhanraj confronted her. Indrani mocked Saroj praising Kanha and Nakul who were not like her. She informed her that Kanha would give more love and happiness to Sayuri the more she troubles her and confronted her. Kanha took care of Sayuri but she suffered panic attack.

Doctor suggested to hire a nurse but Kanha stepped forward to take care of her himself as she was his responsibility. Doctor agreed. Kanha spent the whole night chattering with sleeping Sayuri about various stuffy and Nurse teased him for the same. Nurse called him cute who loved hie wife so much. Next day, Sayuri woke up and Doctor checked her.

He told that she was completely fine and Nurse told Sayuri about Kanha taking care of her whole night. She called her lucky to have such a best husband. Sayuri and Kanha both felt awkward. Indrani got the news that Sayuri got well and thanked God. On her way back home, Kanha fell asleep on Sayuri’s shoulder in car. Sayuri recalled Nurse’s words. Everyone welcomed Sayuri warmly except Saroj and Kusum. They asked her to take care of herself and surprised her by setting up a separate kitchen for herself.

Sayuri got happy and happily did her first cooking in the kitchen. Kanha got teased a lot while Sayuri made tea for everyone. The elders gave their blessing while Saroj fumed. She blamed Sayuri for separating her from her family and planned to ruin Sayuri’s happiness. Kanha and Sayuri spent sleepless night wondering about the other person when Saroj ruined Sayuri’s newly set up kitchen. Sayuri got shocked witnessing Saroj ruining her kitchen and cried. Kanha also saw it and angrily took Saroj vessel and went to her kitchen.

He threw the vessel on floor and left. Saroj calmed Anjali and provoked her that Kanha was busy taking care of his wife and Sayuri would not let him spend time with her. Nakul fell on Saroj’s feet to not spoil the peace of the house but Saroj taunted him. He left upset while Saroj broke things angry that her sons went against her. Sayuri and Kanha spent some light heartened moment and Anjali watched them laughing and walking together.

She fumed and called Kanha and lied to him that she got into an accident. She asked him to come soon to her help. Kanha rushedto her help while Sayuri was also worried for her. Anjali done her own accident after that and waited for Kanha. She hugged Kanha and pretended to be scared once he came there. Rashmi asked for Nakul’s help as some rogues teased her last time when she went to deliver masala products.

Nakul agreed to accompany her. Anjali continued pretending scared when Sayuri called Kanha asking about Anjali. Anjali got angry when Kanha asked about Sayuri’s health and his care for her. She vowed to get Kanha back in her life.

In the future episodes we will witness, Sayuri will wait for Kanha and wonders Why’s he not coming back yet. Anjali will bring to Kanha and will get romantic with him. Sayuri will hear Saroj saying Kusum that soon the unlucky would leave the house and Anjali will enter the house.

Will Saroj accept Sayuri? Will Kanha and Sayuri gets closer? Will Sayuri move on with Kanha? Will Anjali creates problems of Sayuri?