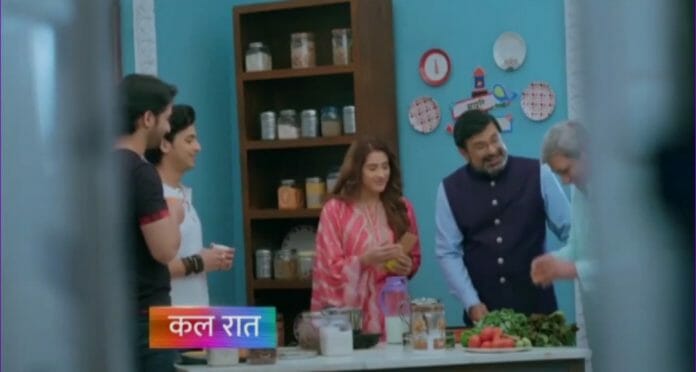 Previously we have seen that, Saroj made Sayuri do difficult household works as revenge while Kanha took stand for Sayuri. Kanha tried consoling Kusum but she asked him to not let Sayuri anywhere near her when groom comes to visit her. Sayuri heard it all. Kanha went to check on Saturday as he heard from Nakul that she didn’t have food only to find her fainted. She rushed her to hospital where the Doctor told that she was terrible ill as she neither had proper food nor water but overworked herself so much. Indrani confronted Kanha for not able to keep his promise. Kanha pleaded her to let him stay with Sayuri for the night. Saroj called Anjali and filled her ears against Sayuri. Kusum informed Saroj about Kanha staying with Sayuri and Saroj fumed more. She cursed Sayuri and Dhanraj confronted her. Indrani mocked Saroj praising Kanha and Nakul who were not like her. She informed her that Kanha would give more love and happiness to Sayuri the more she troubles her and confronted her. Kanha took care of Sayuri but she suffered panic attack. Doctor suggested to hire a nurse but Kanha stepped forward to take care of her himself as she was his responsibility. Doctor agreed.

In the future episodes we will witness, Nurse will praise to Sayuri about Kanha saying that she got the best husband who took care of her the whole night. While coming home, Kanha will fall asleep on Sayuri’s shoulder. The family will set up a separate kitchen for Sayuri so that Saroj will not trouble her anymore. Saroj will angrily breaks things in the kitchen.

Will Choudhary’s accept Sayuri? Will Kanha and Sayuri gets closer? Will Sayuri move on with Kanha?