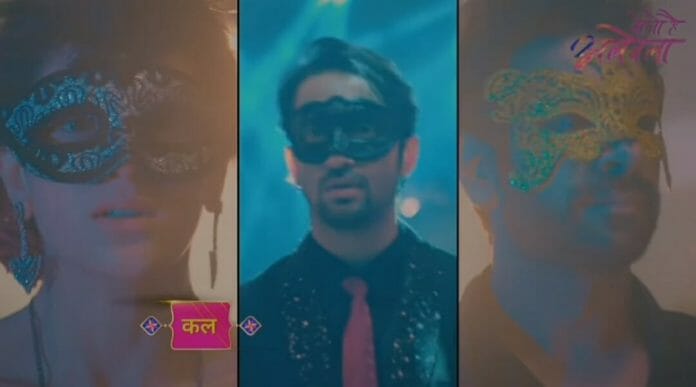 Previously we have seen that, Kanha and Yash planned to invite Sayuri to the new year party to get her recall the past. Vikranth manhandled Sayuri asking her to say where she went along with school. Sayuri lied that she didn’t go anywhere but Vikranth threatened her with knife. He hit the space around her hand with knife and scared Sayuri blurted out about how she went to Kanha’s home to return his wallet upon Kuku’s stubbornness.

Kanha and Yash came there in disguise and got shocked hearing her scream. While Yash was keeping Vikranth busy by inviting him for the mask party, Kanha sneaked in from the other side and found Sayuri crying and shivering in pain. He angrily beat Vikranth and rushed to Sayuri. Sayuri shouted at him in return.

It was all Kanha’s dream. In reality, Yash was still convincing Vikranth to attend the party. Sayuri came out and sent him away while Yash was shocked to see Sayuri after so long. He agreed with Kanha that Vikranth felt suspicious. Vikranth threatened Sayuri to call someone when Sayuri pleaded him not to.

He gave her a warning. Kanha prayed to God to unite him with Sayuri. Sayuri also prayed God that she wished to reunite with her family and wants to say Kanha everything about why she stayed away from him for a year.

In the future episodes we will witness, Kanha and Yash will wait for Sayuri in the party. Yash will ask Kanha how will he identify Sayuri through mask. Kanha will say that he would find Sayuri not through eyes but through heart. Sayuri and Vikranth will come to the party.

Sayuri will identify Kanha and will ask in mind to not coney near her as his each act will land her in trouble.