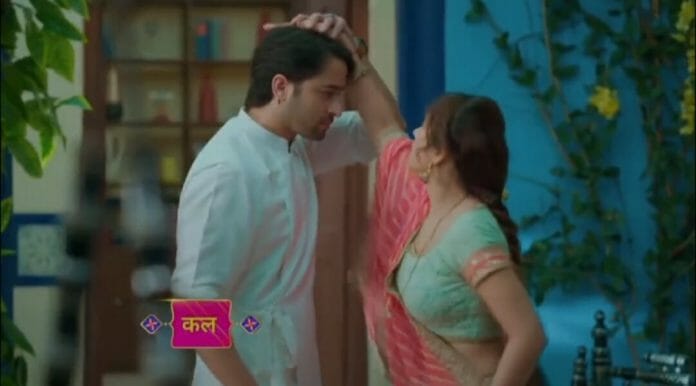 Later Sayuri and Kuku bumped with Rashmi and they both were equally shocked. Sayuri acted like she couldn’t identify Rashmi and behaved like a complete different person. Rashmi was not ready to believe it while Sayuri swore herself to expose Rashmi on right time. Vikranth threatened Pandit to find a solution when he told that there are no possibilities for happy marriage for him.

Saroj was worried about Kanha and Nakul’s breaking bond and prayed God to set everything right. Rashmi in order to test Sayuri said to Pandit to find a bride for her brother in law. She provoked Sayuri saying that it’s him who agreed for another wedding.

Sayuri acted normal in front of Rashmi to fool her. Sayuri was devastated so is Kanha and both were in pain. Yash lied to Kusum and left to Chaudhary mansion to meet Kanha who’s devastated to pick his call.

In the future episodes we will witness, Kanha will make Sayuri swear on him that she’s Sanchi and not Sayuri. Sayuri will struggle to answer. She will be about to confess about their child when Vikranth will come there shocking them.