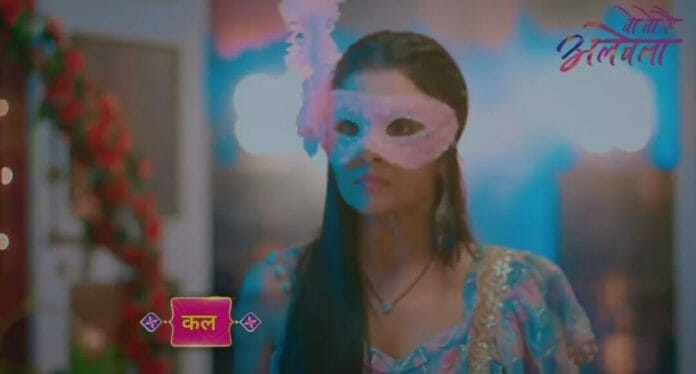 Previously we have seen that, Vikranth threatened Sayuri to call someone when Sayuri pleaded him not to. He gave her a warning. Kanha prayed to God to unite him with Sayuri. Sayuri also prayed God that she wished to reunite with her family and wants to say Kanha everything about why she stayed away from him for a year. Rashmi was suspicious of Kanha’s behaviour.

Dadi Mausi asked Riddhi to propose Kanha and Rashmi noticed it. Kanha and Yash waited for Sayuri in the party. Yash asked Kanha how will he identify Sayuri through mask. Kanha said that he would find Sayuri not through eyes but through heart. Sayuri and Vikranth came to the party. Sayuri identified Kanha and asked in mind to not comr near her as his each act would land her in trouble.

In the flashback it was revealed that Sayuri was threatened by a very big thing by Vikranth which is why she’s acting along with him. Riddhi tried to get close with Kanha while Rashmi warned her against it.

In the future episodes we will witness, Sayuri and Kanha will dance with each other. Vikranth will notice them dancing together. Rashmi will notice the mask party invitation and will wonder if Kanha went there.

She will also comes there and will see Kanha and Sayuri’s dance. Both Vikranth and Rashmi will approach them.