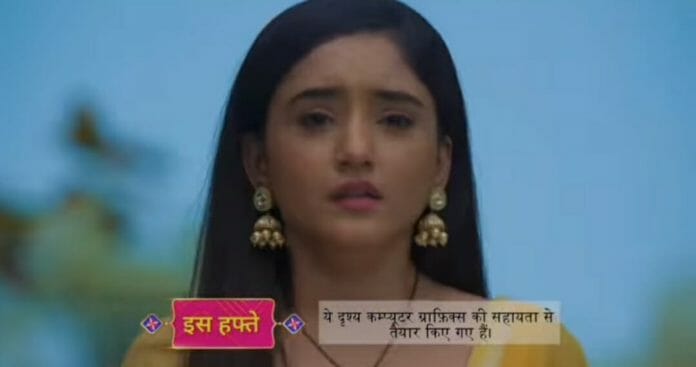 He took an extreme step and tried to break off her nuptial chain on order to break their marriage but Sayuri stopped her on time. She made him swear on her to not do any such thing. Nakul backed off for Sayuri while Rashmi was hell shocked.

Sayuri and Nakul warned Rashmi that it’s her last chance for redemption and asked her to use it wise else Sayuri herself promised to throw a her out of the house. Saroj also agreed to their words. Kanha asked Sayuri to stay together with him no matter what.

Sayuri promised the same. Rashmi planned to eradicate Sayuri from their life so that there would be no issue between her and Nakul. Saroj sent all the three couples to kul devta temple and Sayuri felt something bad was about to happen to Kanha.

Sayuri and Kanha tied threads on God’s flute for their togetherness. Everyone left for the trip and they all had full fun during the trip. Dhanraj and Dadaji noticed some bad omens but chose to ignore it. Everyone halted at different places for a picnic.

In the future episodes we will witness, Sayuri will be present at hill top and will have conversation with Kanha through phone. Rashmi will see it. Kanha will say Sayuri that after today he will not be separated from her even for a second. Rashmi will push Sayuri off the cliff.

Will Sayuri and Kanha gets separated ? Will Kusum gets accepted in her family? Will Rashmi succeed in her plan?