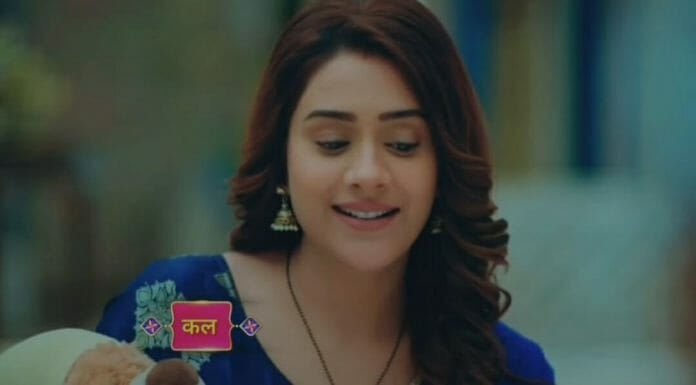 Previously we have seen that, Yash gives a heads up about Rishi’s parents pinning Kanha for Rishi’s murder. Saroj cried in pain while Kanha had a hard time consoling Sayuri and act along with her regarding baby. He shared with Nakul about the same and also told that Sayuri can’t conceive again shocking Nakul.

Saroj who was passing by overheard their talks and broke down and complaints to God. Nakul felt useless as he couldn’t help his brother and sister in law. Rashmi tried comforting him but in vain. Kanha found Sayuri still considering the toy her baby the next day.

He also acted along when Sayuri demanded baby’s stuffs for her teddy. Saroj had a hard time controlling herself. Police comes there and gives a good news that the case against Kanha is invalid given Rishi’s crimes.

Rashmi found Nakul buying toys for Sayuri’s toy and confronts him. She asked him to not feed lies to Sayuri. Sayuri demanded a name for her kid. Kanha thanked Yash for his help.

In the future episodes we will witness, Sayuri’s toy will fall in fire accidently and Sayuri will cry out for help. Kanha will say that it’s a toy and not her baby. He will say that she lost her baby on miscarriage and will ask her to accept the reality. Sayuri will faint in his arms.

Will Kanha and Sayuri gets blamed for Rishi’s death? Will Saroj mistreats Sayuri?
All these questions will be answered in the upcoming episodes.
Stay tuned for more space.