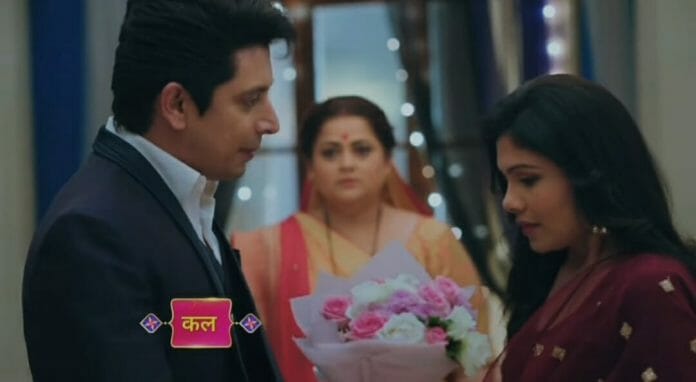 Previously we have seen that, Kusum spoke with Yash to get out of her stressful condition. Sayuri woke up and broke down in Kanha’s arms and mourned for their lost child. Later, they all decided to move on from past but Saroj was worried about Sayuri’s response to the fact that she can’t conceive her.

Sayuri and Kanha spent some quality time together. Kusum called yasha nd shared with him about Sayuri’s recovery. Next day, everyone surprised Kusum for her birthday. Kanha and Sayuri planned the menu for Kusum’s birthday. They found Kusum got ready in simple salwar and notes her about Yash’s visits.

Nakul invited Yash for Kusum’s birthday. Saroj learnt about Yash interested in Kusum while Kusum got ready for Yash. Yash joined them and gave bouquet to Kusum which she happily accepted.

Saroj noticed their closeness. Saroj taunted Rashmi for not wearing her engagement ring while Rashmi reminded her that none cared to talk about their marriage yet.

In the future episodes we will witness, Everyone will dance in Kusum’s birthday party when all of a sudden Yash will kneel down and will forward a ring to Kusum asking whether she would marry him. Saroj will get shocked while others will get happy.

Will Saroj mistreats Sayuri? Will Kusum gets married to Yash? Will Kanha gets proved to be innocent in Rishi’s death?
All these questions will be answered in the upcoming episodes.
Stay tuned for more space.