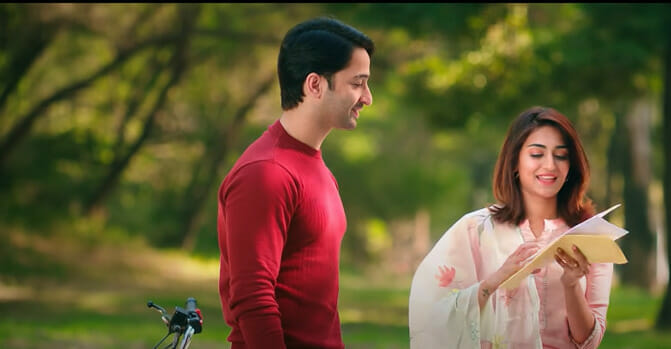 TV best Jodi Sharica aka Shaheer and Erica sharing the screen for the first time in a music video. The music album hit 627K views and counting.

The music video featuring the lovable Shaheer and Erica has released. And without any doubt like always the couple created chemistry on the screen. Sharica is a treat to watch on screen. They share an unbeatable bond and works hard to make their fans proud with their artwork.

The music video has a heartwarming story telling. Shaheer is a uniformed guy, Erica as a doctor again is cherry on cake.

The music is soothing. Fans can’t stop falling for Wo Kashish.

Fans enjoying the song. Here is the best comment on Sharica’s first music album together.

“Every time he comes to give new flavour of his role. Be it his shows or MVs he always gives reason to treat ourselves. After playing so many characters to a Blind man here as a Navy officer his personality & expressions are something else which I have never seen before. Hats off to you Shaheera ️ #ShaheerSheikh”

“They both can create the same magic even after such a long break. Shaheer and Eri perfect onscreen couple. Javed and Anwesha’s singing is soulful. Nice song”

“This duo shaheer and Erica creates magic whenever they work together and the same time music is also soft and melodius,its like watching a movie”

Shaheer and Erica are fans favourite ever since duo was paired in Sony TV’s Kuch Rang Pyaar Ke Aise Bhi. The show seen three seasons so far and was hit. Sharica is TV’s sizzling couple. Fans can’t get enough of SHARICA.

Sharing the song on their social media Sharica captioned “Finally ‘Wo Kashish’ is Out Now!!!
Show your love and tell us in the comment section which part did you like.
Don’t forget to subscribe to our YouTube channel of @kashishmusicofficial”

Tell us what more you liked about the song.