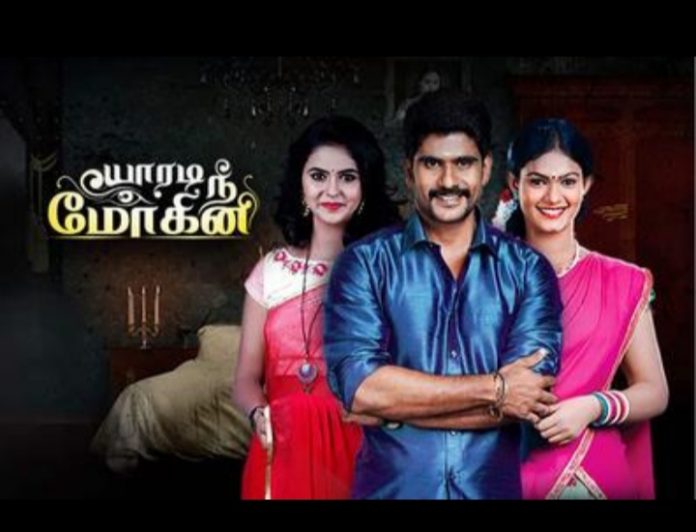 The episode starts with Swetha’s aunty enquires her what’s bothering her? She says to her as nothing. Swetha tells her that she used to shine well in that house but she never expected her to be bold here too. She questions Swetha Why is she still here? doesn’t everything go as she expected when she is there? Swetha Informs to her she is staying away from them to fulfill her wish. Akshaya calls her and narrates to her what ever Maruthu done in house. Swetha gets surprise to hear it and shares to her that she never expected Maruthu will change like this after got money. Akshya adds with her that Marurthu ruined everyone happiness here.

He is showing too much attittude here. He is replacing Swetha here. Swetha assess to her she will reach there soon. Akshaya tells her that she is waiting for her. Swetha disconnects the call. Aunty praises Swetha for being in update and appreciates her presence of mind. Aunty questions her why is she here? Swetha informs to her that Vennila is trying to be close with Thiruthani while feeding milk to him. She can’t able to do anything there going against Mutharasan. One day baby will get attached to Vennila because she is his real mother. She wanna avoid it all that’s why she took him this much for and made him used with bottle Milk. Hereafter he don’t need Vennila. Now everything is going as she expected so she is going to leave from here within two days.

Mutharasan and Vennila laughs thinking about Maruthu’s acting. Mutharasan making fun of Mutharasan in front of Vennila. Mutharasan shares to Vennila that Maruthu is acting so much to made them believe he is busy always. Apart from this all he likes to see hi. Achieving something in business. Vennila complaints that achievement is not a matter here but he wanna accept Kalai. They played this drama to see her in happiness but nothing happened as they wished. Mutharasan tells her it will happen soon but for that they wanna wait patiently.

They can’t able to change Maruthu soon reasoning he grown up learning all bad things.its not a cinema to change in one song. He gives a example to Vennila comparing with Maruthu’s state. Vennila complaints that she has no idea how much Kalai wanna get insult to see the result. Mutharasan says to her she might bear it to see a change in Maruthu. Vennila tells him that she advised to Kalai to bear everything. Mutharasan asks her to clear the bed. Janani wishes to eat anything.

Janani complaints that he has no idea what’s pregnant girl like to eat? She adds that he didn’t bring anything to eat that’s why she is eating it. She asks him to buy the mango. He nods and leaves go bring mango. Simran informs to doctor that she got married 1 year before. They didn’t Postpone their pregnancy though she is not pregnant yet. She informs to her that she would like to become mom soon. Doctor complaints that they might take healthy food. Karthick questions her Is he wanna take rest. Simran convinces him and doctor also advised to him. She asks him to take the test nothing to worry.

Doctor asks Karthick to Meet Dr. Purushothaman he will check him. Karthick leaves from there. Doctor asks them to collect the report tomorrow nothing to worry. Gautham hides the mango seeing Vennila. Vennila informs to him that wash base pipe broken. He assures to her that he will call the plumber. Gautham thinks where is the mango went? He is searching for it Vennila enquires him what’s he searching? He lies to her as nothing. Janani comes there Gautham thinks what will he answer to her?