Episode begins with Preesha shows Saaransh’s birthmark to others. She recalls that how she saw Krishna. Krishna hugs her and the latter asks her that did she came alone. She tells her that she don’t want to go away from her and informs her that Ahana taking her to London but she don’t want to go there that’s why she left the house without informing anyone. She says to her that she want to stay with her. Preesha tells her that she will talk to Ahana and takes her to the room. Krishna falls down by mistake and her wig too falls on the floor. Preesha gets shocks seeing that and asks her that why the latter wears wig. Krishna tells her that he is boy but Ahana told her that he should wear wig and live as girl. Preesha asks Priya to take Krishna to Anvi’s room and give food.

Gopal returns to Preesha and tells her that the latter don’t know that why Rudraksh married Sania but he knows. He reveals everything to her from Saaransh being alive to Rudraksh and Sania’s fake marriage. Preesha shocks hearing him and thinks that only Krishna lives with Ahana and she goes to Anvi’s room. She checks Saaransh’s birthmark and confirms that Krishna is Saaransh. She tells him that the latter is her Saaransh and hugs him ( Title song plays in the background ).

Gopal gets emotional seeing them. She tells Saaransh that they failed to recognize him because Ahana changed the latter’s face but God reunited them. She comes to the reality and tells everything to Rudraksh. She tells him that Krishna is their Saaransh. Rudraksh moves towards Saaransh and he recalls the moments he shared with him and hugs him ( Title song plays in the background ).

Armaan goes aside and calls Sania and informs her that Rudraksh stopped the marriage and they got Saaransh too. He tells her that Preesha should not know that he make her do all this because he don’t want Preesha to hate him. She asks him to not worry because she knows that how to change the story in their favor. Meanwhile Ahana searches Krishna and she scolds Rosy. Mishka tells her that they got the properties so it’s not matter that where Krishna went. Ahana agrees with her and they leaves for airport.

Precap – Ahana confesses that she gave medicine to Saaransh to erase his memory. Police arrests Ahana. Preesha thanks Armaan. 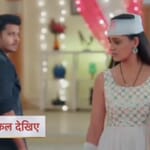